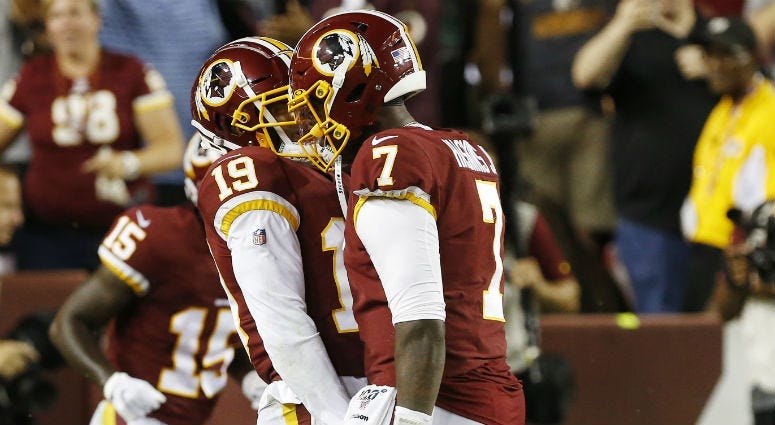 Rookie quarterback Dwayne Haskins delivered one of the best balls of the Redskins' preseason Thursday night against the Bengals.

The Redskins offense was flirting with midfield at the two-minute warning when Haskins caught wide receiver Robert Davis streaking out ahead of the defenders. Haskins took a big shot on the play as he stood firm in the pocket to deliver a 55-yard strike to Davis, who could use some good plays on tape as he fights to make the 53-man roster.

Haskins just checked his receiver in at MOTEL 6 with that dime -- @dh_simba7 pic.twitter.com/CARbUMT9gX

Dwayne Haskins' first TD pass of the preseason is a BEAUTY ------#CINvsWAS pic.twitter.com/vRlB69sP8o

That is SO big time from Haskins. 3rd down. Blitz coming. Stands in there and waits for Davis on what I think was four verticals up the seam.We also have a made kick! 13-6 #Redskins.

Dwayne Haskins just threw a 55-yard TD to Robert Davis on 3rd-and-8 while being hit. Stood tall in the pocket and heaved the ball deep. Heck of a throw for the rookie QB. #Redskins

Sweet play by Haskins. Hung in there waiting for Davis downfield and then threw a strike for 55-yard touchdown. And, somebody converted an extra point so 13-6 Redskins.

Robert Davis doing everything he can to make the 53. And Haskins has a cannon.

It was Haskins' first touchdown pass in a Redskins uniform. What a beaut.