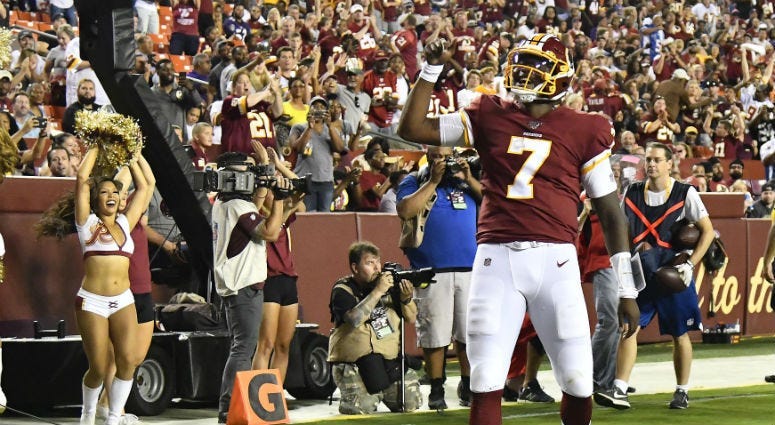 The only reason to watch the Redskins preseason finale was quarterback Dwayne Haskins. The rest was irrelevant as only fables talk of people making the roster based on the last effort.

At least Haskins delivered. It may have been his first start and possible farewell for the year, so Haskins gave the few fans at FedEx Field something to remember.

Haskins' seven-yard touchdown pass to Steven Sims was a little low on a roll-out, but he completed four of five for 70 yards during the scoring drive with only a drop by Cam Sims preventing perfection. Indeed, Cam Sims didn't help his roster bid with three drops in the first 17 minutes.

Overall, Haskins completed 10-of-17 for 104 yards with one touchdown and a 96.2 rating over the first half. A lot of good and some things to clean up, as coach Jay Gruden loves to say.

And now, Haskins fades to the sidelines as Case Keenum starts against Philadelphia Sept. 8. Most likely, Colt McCoy is the backup if his weakened leg is ready after missing the preseason. That means Haskins holds the clipboard this season barring injuries or an overall poor Redskins record that forces Washington to play him.

Holding the clipboard has long been the Redskins' plan. They don't want to rush the rookie into a poor effort that might reverberate through his career. Haskins will watch and learn.

Haskins learned a lot over training camp, but his footwork sometimes looked ugly and his timing could have been better. A high 25-yarder to Donald Parham forced the latter to adjust and lose a few extra yards. A 12-yarder to Cam Sims was thrown behind him to cost a few more yards, too.

These are the issues to work on during the few snaps he'll get as a third-stringer during the regular season. Most likely, Haskins stays late to throw to other reserves during the week, though he'll run the scout team until McCoy is ready.

It was a glimpse of the passer. Maybe a tease, perhaps a taste of what's ahead. For now, that has to be enough.