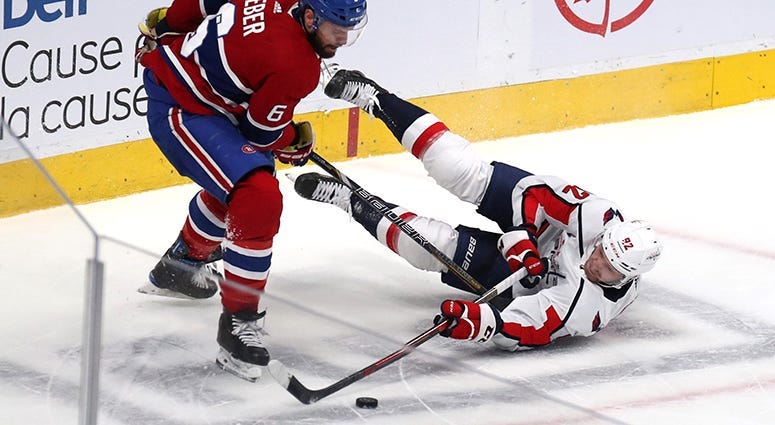 Evgeny Kuznetsov topped out with a career-best 83 points the year the Capitals won the Stanley Cup, and two years later, is still showing signs of growth in his game.

What brought this to light was a brilliant play made by Kuznetsov in last week's 4-2 win over Montreal, in which he forced a turnover on the forecheck, and as he lost his footing, whipped the puck around from his backside in front of the net, where it eventually found Jakub Vrana's stick for his 23rd goal of the season.

"I think if Kuzy did more of that," 106.7 The Fan's Danny Rouhier said. "We know the skill is there – the end-to-end, the gliding and how just incredible his hands are – but if he added that to his game more regularly, who knows how many points that guy could score. What did you make of that?"

"The one thing about Evgeny Kuznetsov as we all know as such a great skater, it's all about puck pressure now in the NHL more than anything," Laughlin said during his weekly 106.7 The Fan appearance, presented by American Standard Heating & Air Conditioning.

"And even though Shea Weber got an unlucky bounce and the puck bounced over his stick, he knew he was being pressured by Kuzy," he said. "The puck gave an unlucky bounce to the Montreal Canadiens, but Kuzy was right there to make a very aggressive play, number one. Number two, the effort to get to Oshie, to tap it to Vrana, was spectacular.

"And I think Kuzy, you know, I think without having no Ovechkin in the lineup, maybe he said, 'You know what, boys? I've got to elevate my game.' I thought he had, I use the term 'soap-on-a-rope,' meaning that the puck was always within arms-length of his stick, he was hanging onto it, he was making the right decisions. That's what Kuzy has to do."

"If Kuzy doesn't play like that, the Capitals aren't as good," Laughlin continued. "When Kuzy's in control – and he was for a couple of shifts during the game where he was just the best player on the ice, he dominated – and to me, that's a sign of good things."

"I think Kuznetsov has to continue to grow as a player," he said. "I think we've seen some of his best work arguably in the playoffs in the past, but he's still got more, and he's a guy that, arguably, I would say would be a 100-point guy if he gets consistent in his play. And (Monday) night was a good start for him. I loved his game (Monday) night."