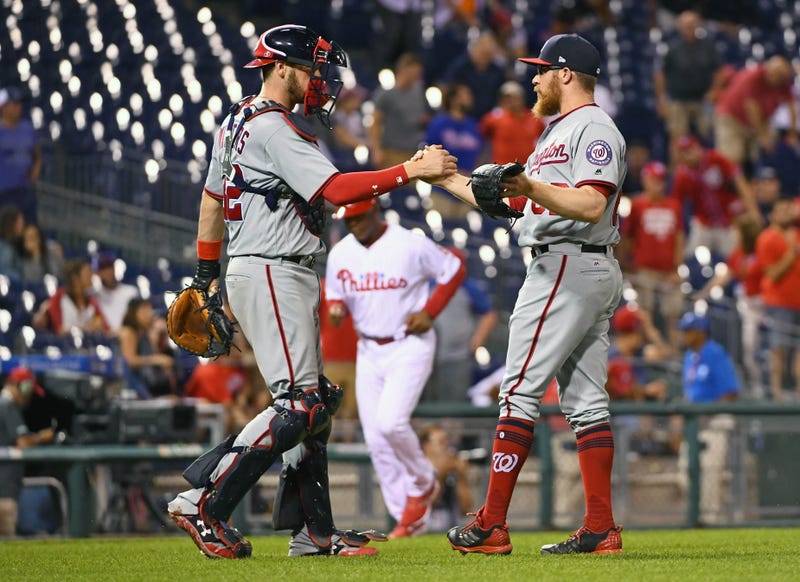 The Nationals return to action Friday against the Atlanta Braves in deep trouble. The club is .500, 5.5 games below the NL East-leading Philadelphia Phillies, and must play far better than it has if it wants any shot of playing postseason baseball.

That being said, all is not lost, and there are plenty of signs this team can get itself back in contention. Here are five off the bat:

1. The return of injured stars

The injury bug has bit the Nats hard this season, but several key pieces will be coming off the disabled list almost immediately. Stephen Strasburg, sidelined for over a month with right shoulder inflammation, is scheduled to start the series-opener against Atlanta on Friday, and should provide a boost to a starting rotation that has struggled in his absence.

Ryan Zimmerman could also return from an extended DL stint Friday, and once closer Sean Doolittle recovers from his left toe injury, the Nats will be as healthy and whole as they've been all year.

2. Mike Rizzo has a great track record at the deadline

Nats GM Mike Rizzo has already proven this season that he is not afraid of making bold moves, the trade for Kelvin Herrera an acquisition few saw coming. And over the past few seasons, Rizzo has made several deals that plugged holes in Washington's roster, such as putting together the "Law Firm" of Brandon Kintzler, Ryan Madson, and Doolittle last July, and two years ago acquiring Mark Melancon.

Not all of Rizzo's moves have worked (see: Jonathan Papelbon), but he has certainly earned the trust of Nats fans that he can bring in players to improve the ballclub.

Sports statisticians often talk about "regression to the mean," meaning that a player putting up far better numbers than in the past will likely cool off eventually. The reverse applies to Harper, who should progress to the mean if his stats from past seasons are any indication.

Nats fans have gotten on Harper's case for his subpar batting average, the Home Run Derby champ batting just .214 this season. Nonetheless, Harper is a career .277 hitter, and has never hit below .243 in a single season. The odds are in Harper's favor he'll improve after the All-Star break.

The Nats have 66 games left this season, and fortunately for them, none of those 66 are against an American League opponent.

Washington won five of their six games against the basement-dwelling Orioles this season, but went 4-10 against the rest of the AL East, including two three-game sweeps at the hands of the Red Sox and Blue Jays. Terrible, of course, but the Nats won't have to worry about facing anyone from the AL again unless they somehow reach the World Series. Speaking of championships...

5. The Caps had their struggles too, and now they're Stanley Cup Champions!

Before the NHL season began, no one expected the Capitals to win a Stanley Cup title — the roster had undergone plenty of upheaval in the offseason, and Barry Trotz was essentially coaching for his job. Fast forward eight months, and the Caps were celebrating the first championship in franchise history.

Things look dire for the Nats right now, but if the Caps taught us anything, it's to not give up too soon. There's hope yet that the Nats can make a run like their crosstown counterparts.