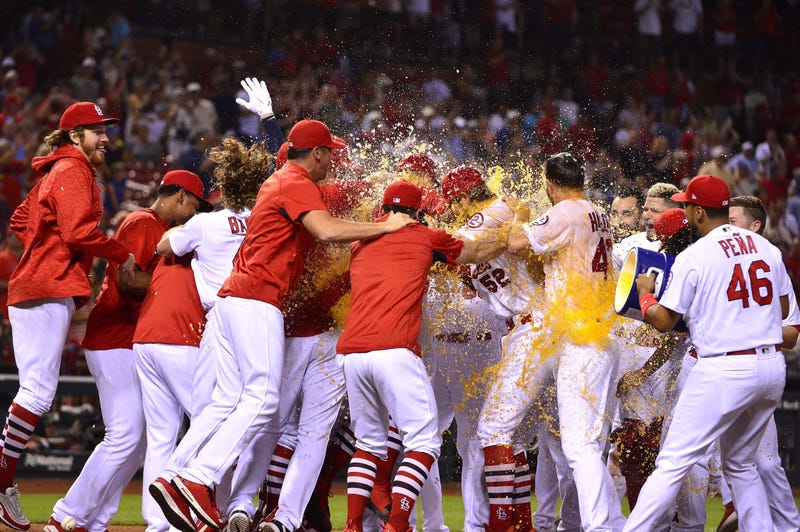 The Nationals were sitting seven games back in the NL East entering Tuesday's game against the Cardinals. The window to close the gap is now down to 43 games.

Suddenly, it seems like it'll take a miracle for the Nats to retain the division crown for the third straight year.

"How cool was it to get home from work at 7 o'clock and flip on TV and watch the Nats walk people off?" Santangelo said. "You remember? What was it, three or four years ago? When they had five or six in a row at home, and they had the bucket of filth and they were dumping on it, and my lame line about, 'It's happening, folks. Enjoy the ride.' I mean, this is what the Nats used to do to everybody.

"We were on the other end of it for a nice little run, where we were the team doing this to everybody else. And then their fans were calling in their sports-talk radio shows saying, 'What the heck's going on? The Nats keep walking us off!' I mean, this is what we used to do."

Rizzo to The Sports Junkies on July 25:

"This is a challenge like we've never had here in Washington. I've had it before in other places and been successful doing it. We're not going to win the division by 20 games this year, or 17 games like we have in the past, or even eight games like we did the year before. This is gonna be a grind. This is gonna be a dog fight to the end and we'll see what we're made of at the end of this thing. I'm looking forward to the challenge.

"I'd rather have it in a different way. Believe me, I'd rather have the season going in a different direction and have an easier road to be the three-time National League East champions, but hey, this is baseball. This is the big leagues. It's not easy to win in this league. I think maybe we took that for granted a little bit, in the clubhouse, in the GM box, in the owner's booth and in the fanbase. It's tough to win in this league and there's other teams that are trying just as hard as we are."

The Nationals, just as they are now, were sitting seven games back at that point, before Brandon Kintzler and Shawn Kelley were exiled to Chicago and Oakland, respectively. Fans appear overwhelmingly angry at the Nats for not living up to their own extraordinarily high standards – of consecutive division titles, NL East champs in four-of-six seasons prior. "Maybe we took that for granted a little bit" hits like a freight train.

Which brings us back to Santangelo's refreshing perspective. Since 2011, he's had a unique view from the Nats TV booth, guiding the more youthful end of Washington's fanbase from endless losses into their first period of sustained success. The Nats have posted a winning record in each of the past six seasons, and now they're hovering around .500.

Imagine if you were eight years old when the Nats started winning in 2012. Now 14, it's got to be maddening to see them come up short on an every-other-nightly basis. Now, Nats fans are "getting the other side of it," Santangelo says, as if commissioned to talk fans through another teachable moment.

You may not even get the chance to be let down in the postseason!

"So I can't sit here and go, 'Yes! Definitively, they're going to turn this thing around!' Because I'd be less than honest if I thought that in my heart right now. So, we're getting the other end of the coin for a little bit right now and this is sports. We're mad as fans because that used to be our escape."