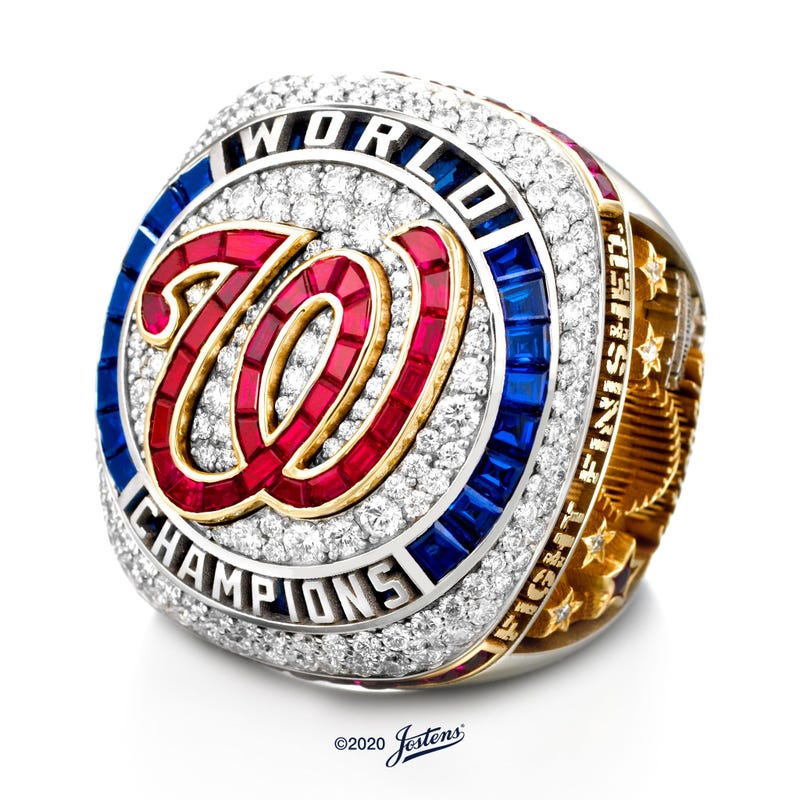 Photo credit Courtesy of Jostens
By Chris Lingebach 106.7 The Fan

The Washington Nationals unveiled their 2019 World Series Championship rings, complete with Baby Shark on the interior holding the Commissioner's Trophy!

Crafted in 14-karat white and yellow gold, the top of the ring boasts the team's Curly W, made from 30 custom-cut genuine rubies to represent the 30 runs the team scored in their four victories over the Houston Astros in the World Series.

Surrounding the logo are 58 pavé-set diamonds, while "WORLD CHAMPIONS" is inscribed above the logo and below it, set with 32 custom-cut genuine sapphires to represent the sum total of the walk-off wins by the 2019 Nationals (7), shutout wins (13), longest winning streak (8 games), and playoff rounds won (4).

An additional 108 diamonds are featured along the ring top, representing the number of regular-season and postseason wins (105), plus one diamond for the World Series title, and two additional diamonds as a nod to the franchise's dual history as the Montreal Expos and Washington Nationals.

The top and bottom edges of the ring feature each feature 12 princess-cut rubies, representing their postseason win total.

The player's name is on the left side of the ring, under which you'll notice the American flag, waving alongside the championship year, 2019, and some of the nation's capital's iconic buildings and monuments. Bannering the U.S. Capitol Building are the Roman numerals MMVI, representing the year the Lerner family purchased the franchise. The player's number is set in diamonds along the bottom.

On the right side, you'll see the words "FIGHT FINISHED," the final evolution of the Nationals' 2019 postseason motto, "STAY IN THE FIGHT." Below it, the stripes of the American flag fill the sky above Nationals Park as the backdrop to the Commissioner's Trophy. Here, you'll also find four diamonds set upon a star base, and a custom-cut, star-shaped ruby. The five stars represent the five elimination games won by the Nationals during the postseason en route to winning the World Series title. The four diamonds on the stars represent the four previous National League East titles won by the Nationals, while the red star signifies the World Series championship.

The ring's interior is engraved with a "Baby Shark" – outfielder Gerardo Parra's walk-up song that caught fire and became somewhat of an anthem along their World Series run – which is shown hoisting the Commissioner's Trophy. Also feature along the interior are the team logos of each of the Nationals' postseason opponents, along with each series score.
Rounding out the interior is 10.30.19 – the date the Nationals won Game 7 of the World Series to eliminate the Astros. You'll find the team's mantra, "GO 1-0 EVERY DAY" along the palm of the ring.

In total, each ring has an average of 170 total diamonds, 32 custom-cut sapphires, 31 custom-cut rubies, and 24 princess-cut rubies for a total stone carat weight of 23.2 carats.
The championship rings were designed by Jostens, the same jeweler that designed the Capitals' 2018 Stanley Cup championship rings.
Jostens has also designed a limited edition ring, designed to be as close to the rings awarded to the team, which is available for purchase for Nationals fans here. 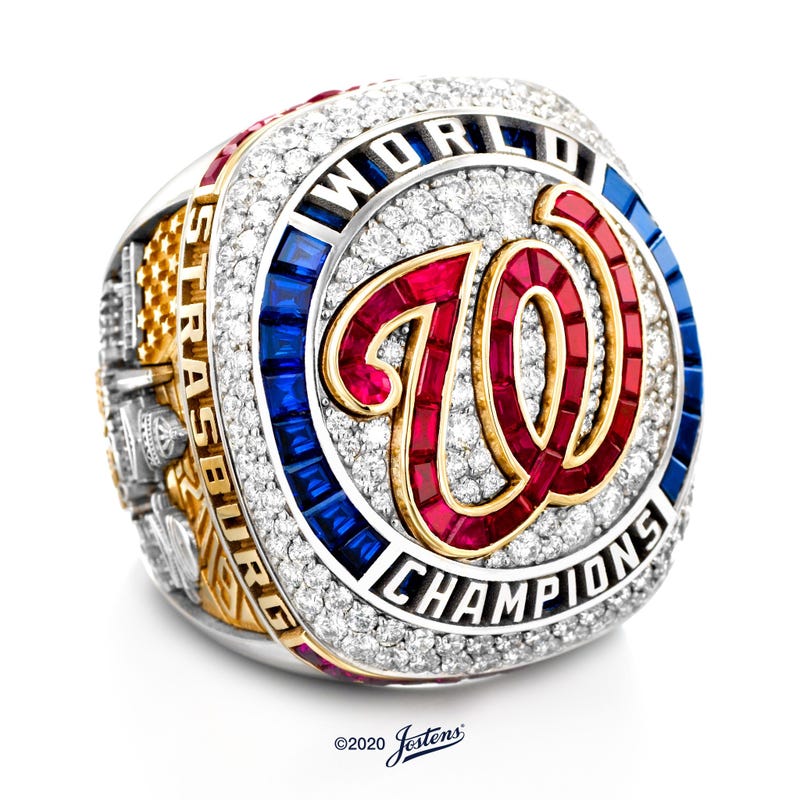 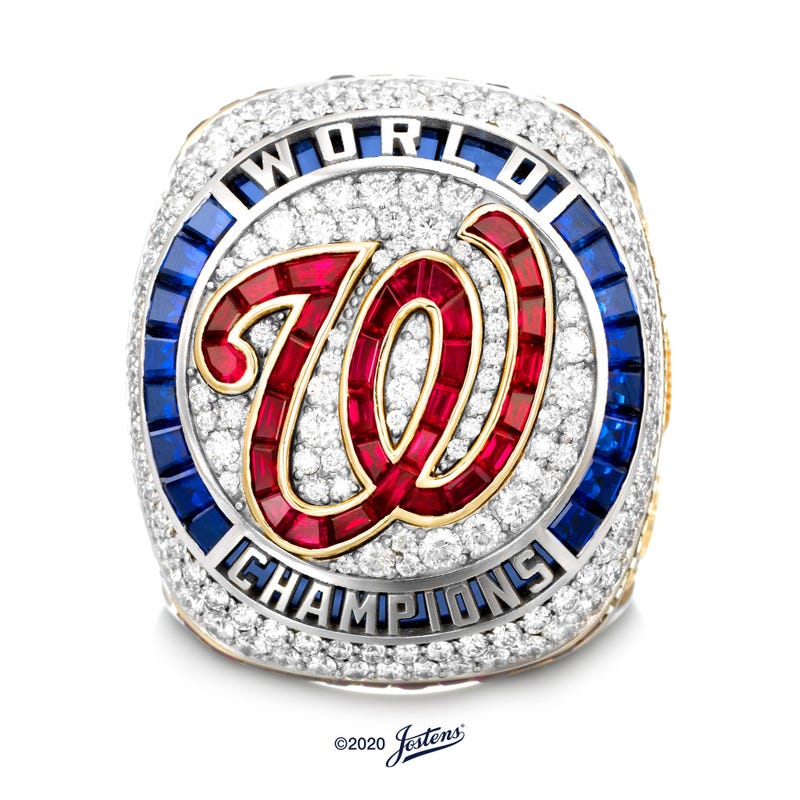 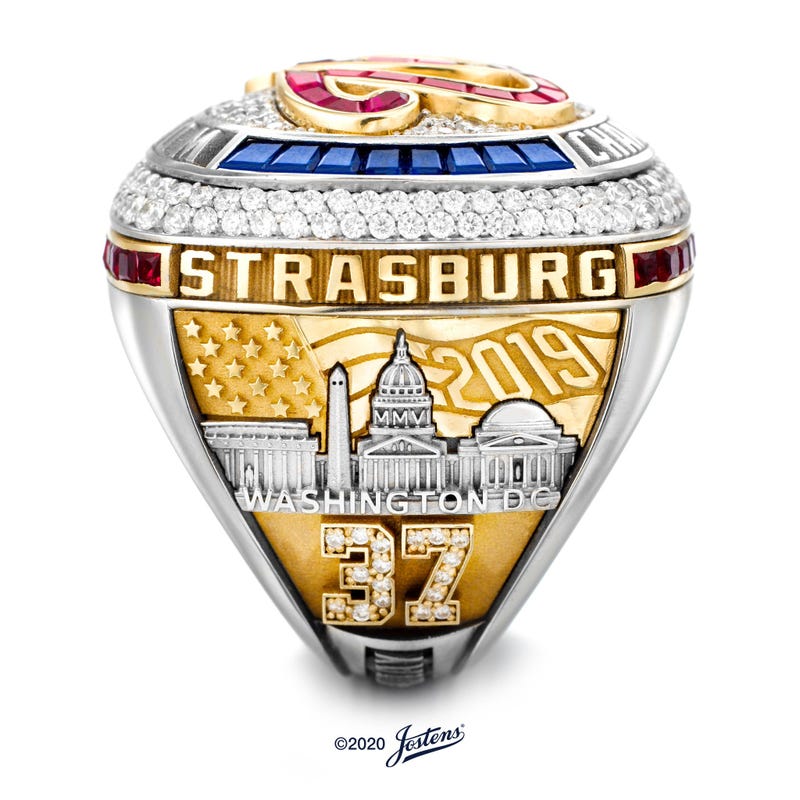 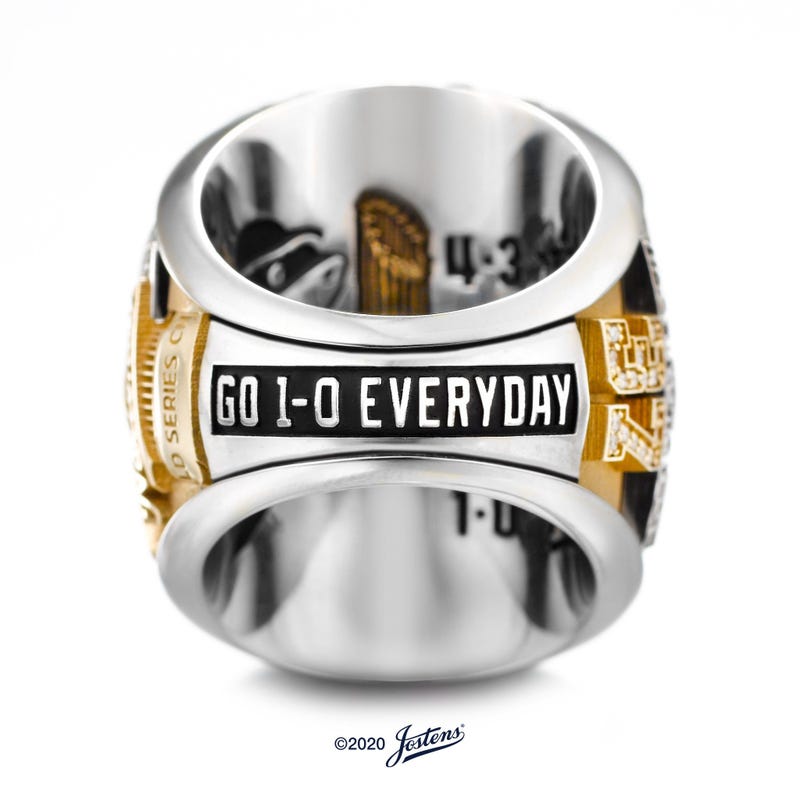 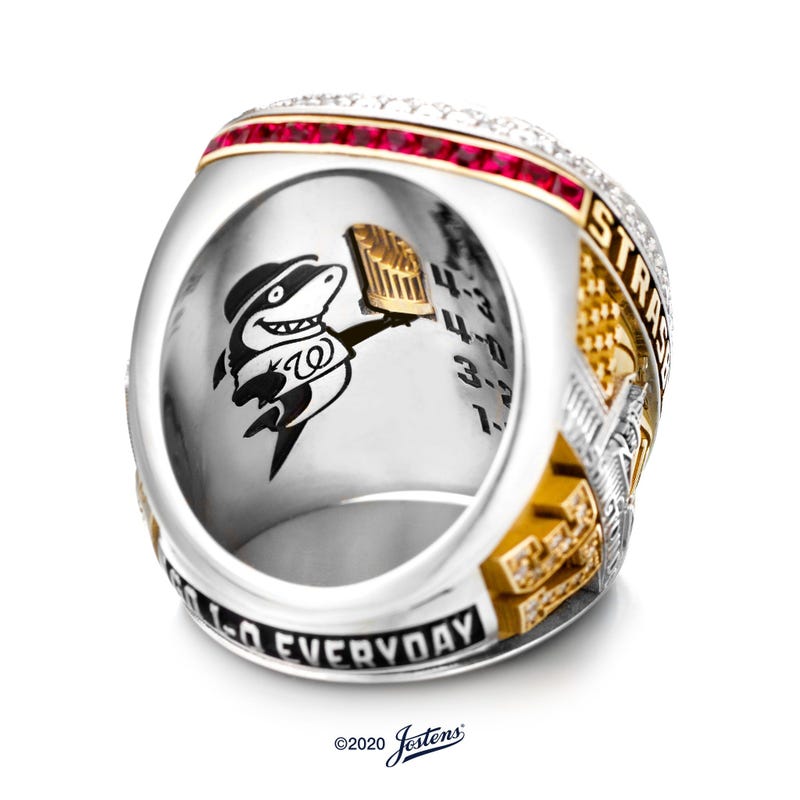 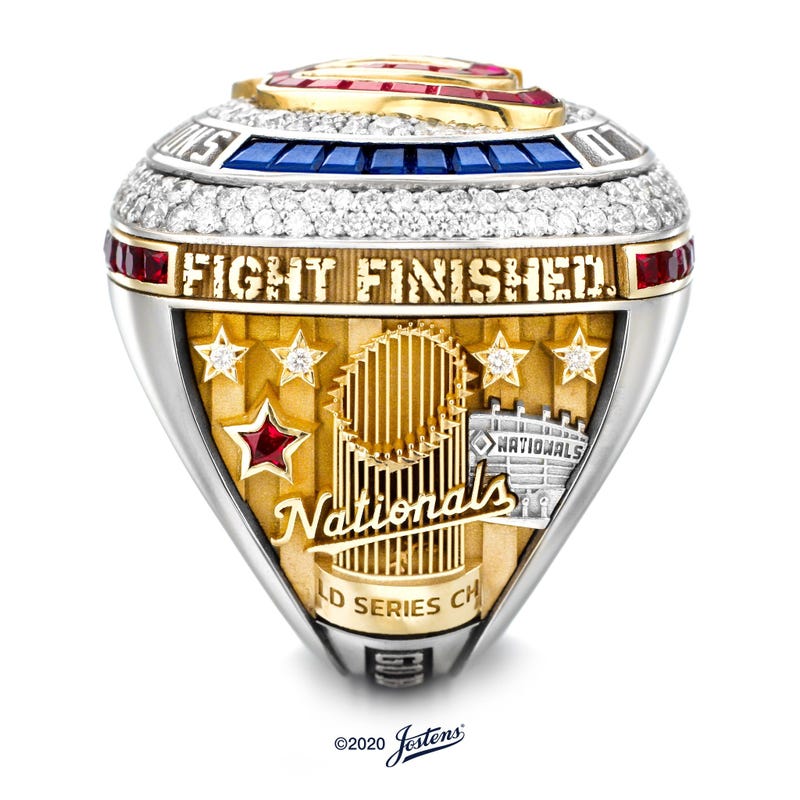 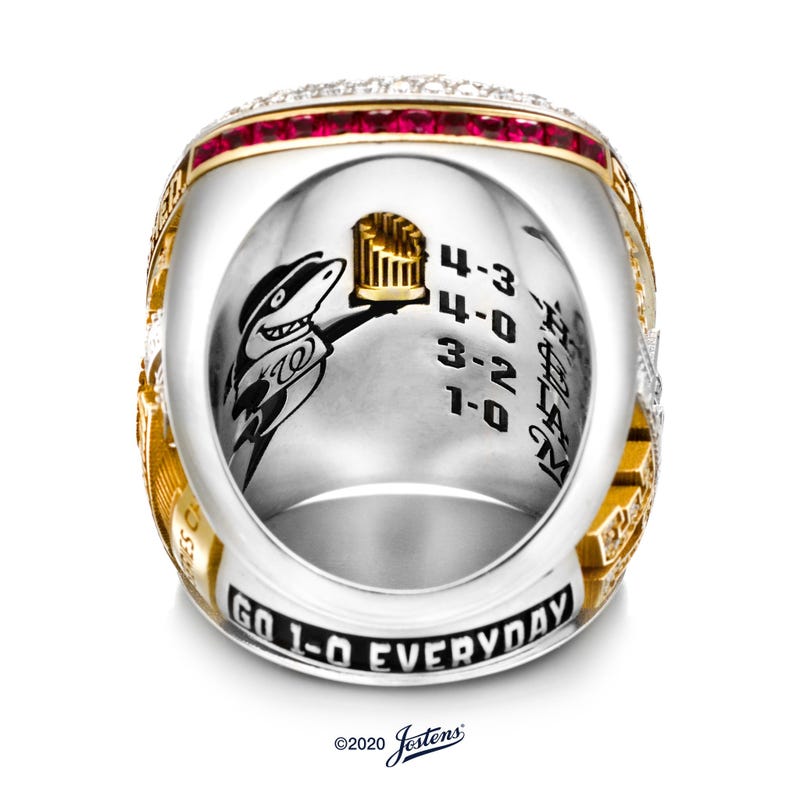 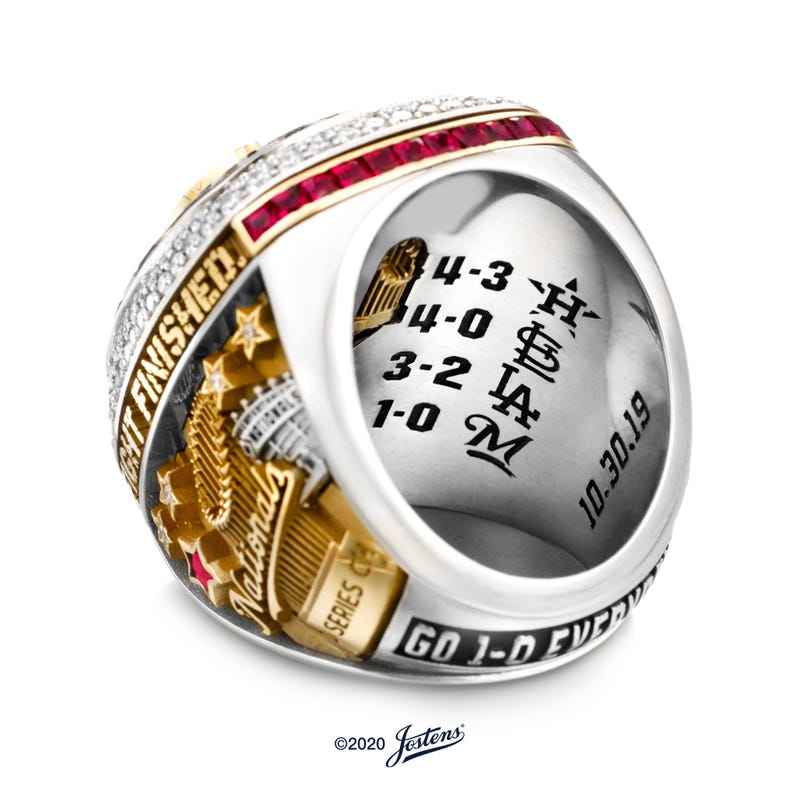