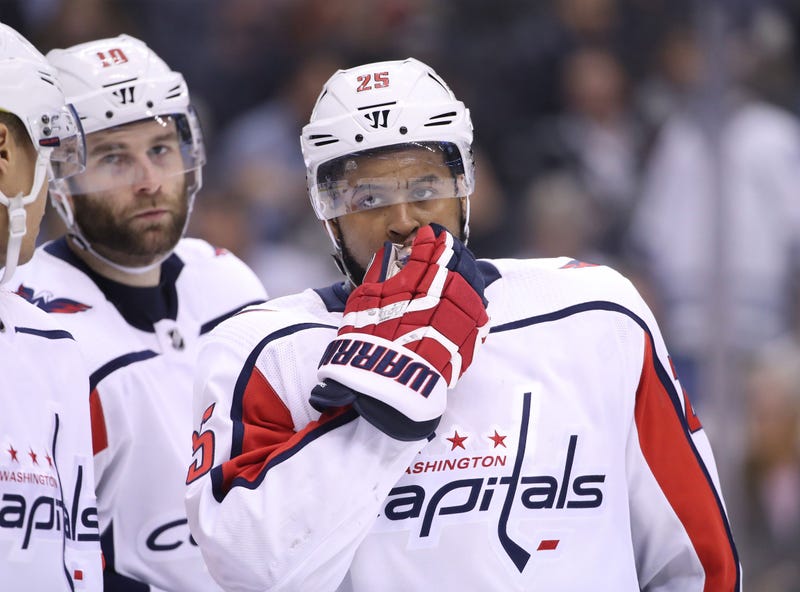 Not since November 21 against Chicago has Capitals winger Devante Smith-Pelly scored a goal.

"Alright. So whenever it happens, next goal. I'm predicting it to be tomorrow night, as a matter of fact, against the Devils," Paulsen declared to Smith-Pelly during his Nov. 29 appearance on 106.7 The Fan, sponsored by F.H. Furr. "But whenever it takes place, you tilt that stick sideways, you play a little guitar. You are Bradley Cooper in 'A Star Is Born' my friend."

Smith-Pelly would not score the following night against the Devils, of course. As a matter of fact, it had only been three games since his last goal when DSP first agreed to a special goal celebration in honor of Grant & Danny. Since? Well, another 28 games have gone by and Smith-Pelly is still scoreless, bringing his cold streak to a total of 31 games. Yikes.

A real shame, because he'd score four goals in the first month or so of the season, prior to the Grant & Danny Jinx.

All these months later, Grant & Danny are starting to feel a little guilty.

"Devante, we want to extend an olive branch here," Paulsen said Thursday. "We are willing to admit that it was our fault that you've gone on a goal drought of 31 games since we asked you to celebrate the way that we wanted to."

"Now, first of all, we still need you to celebrate the way we want you to when you score a goal," Paulsen went on. "So we have to have you agree to that."

"So you're gonna score, and then you're gonna play the guitar and we'll all be happy," Paulsen predicted (again). "However, here's the olive branch. First of all, as a show, we'd like to apologize. So that's the first way we break this drought. We say that we're sorry. We didn't mean to jinx you. You were on a heater. We talked about it. We shouldn't have done that.

"The second thing though is I have prepared the first verse of the hockey song, and I think if you repeat the lyrics after me when I say them to you, this will wear off the hex of the non-goal-scoring after you hit two posts the other night. So I'll read the lyrics, and then you repeat them after me and then you'll go score a goal tonight."

Smith-Pelly reluctantly went along with this latest scheme, which you can hear below.