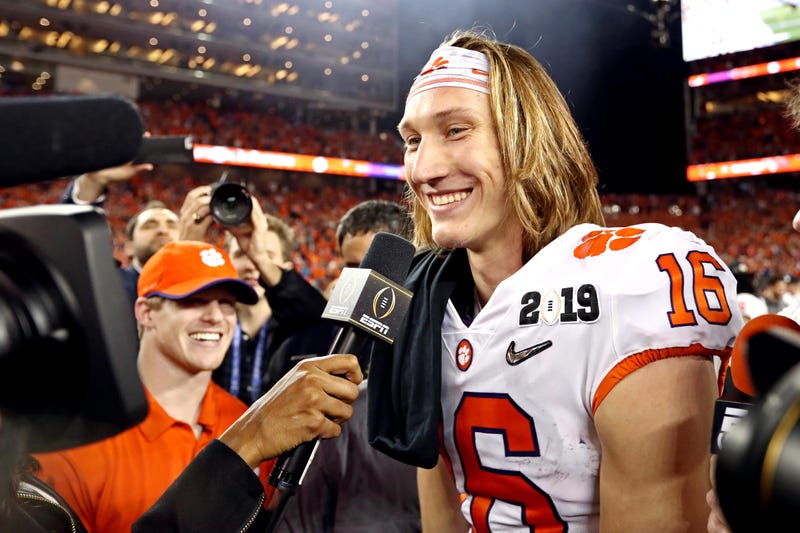 However, if Grant Paulsen were the Redskins GM, he wouldn't want Lawrence on his team...because of his long hair.
"I am taking him in a heartbeat, and I'm sitting him down right away," Paulsen explained to co-host Danny Rouhier Tuesday. "I'm sitting him down and I'm going, 'Listen, Trevor. You're gonna be a superstar. I want you to be my superstar for the next 15 years. We gotta cut your hair.'"

"If he fights back and says he's not gonna cut his hair, we've got quite an asset that's on the block for anybody who wants him."

At the very least, Paulsen knows this is his "worst take ever."

Trevor Lawrence is a very rare case of a guy who could absolutely excel in the NFL before being there years post high school. He would go first overall as a true freshman at 19 right now.

Callers began chiming in on this ridiculous take, and several AGREED with Paulsen.

Not only are people calling in about Grant's stance on Lawrence's hair and never being on his team, but every caller agrees with him! https://t.co/3ciPuv2s8i

"If the Redskins drafted him, I'd have a hard time rooting for him with the hair. He'd have to cut that hair," said Vinny in Nokesville. "My soul would break down a little bit every time I'd cheer for that guy. You play quarterback, you can't look like a goober, you can't just be a doofus-looking guy."

"The only thing that gets in my mind when I see Lawrence from Clemson is 'Sunshine' (Ronnie Bass) from 'Remember The Titans,'" added Antlony in La Plata. "And you make him cut his hair."

Dawg who did this bruh ??? ---- pic.twitter.com/nQlzTkOHgJ

At least John in Sterling still lives in the land of the rational.

"Grant, you would not be a GM. I totally disagree with you," said John. "He says no, and for the 10 years you are the GM, your franchise is going down the tube because you passed on my man with hair that comes out of the back of his helmet."

Thank you so much for your call, John. We need more like yours.