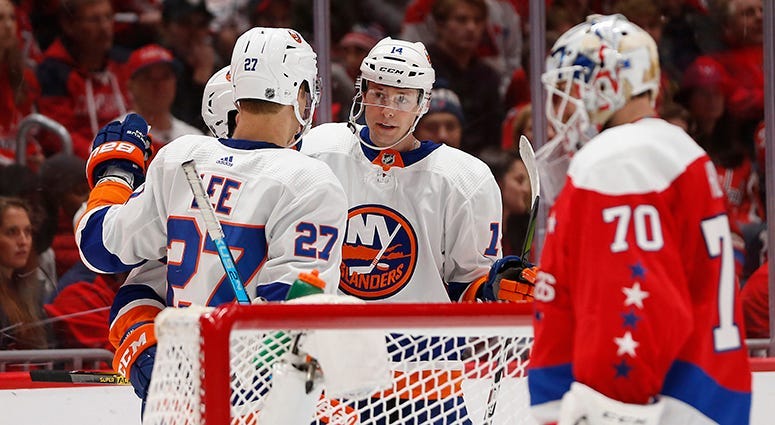 Days off are good for professional hockey players. Too many games off can be bad, disrupting a team's rhythm and leading to sluggish play.

The Capitals should be wary of this as the hottest team in the NHL – save for their two-game losing streak – which happens to come on the heels of the Christmas holiday, around which they had four days between games. Since Christmas, they've gone 1-2, finally beating Columbus only to drop two straight against Carolina and the Islanders, respectively.

Once more, soon enough, they'll undergo a long layoff, with nine days between games – for a full eight days of rest – before and after the All-Star Game later this month. What's the key to avoid falling into a rut and losing valuable momentum coming off such long layoffs?

"I think for myself, it's important, once you get back from one of those breaks, that you go as hard as you can in practice," Carl Hagelin said during his weekly 106.7 The Fan appearance, presented by F.H. Furr.

"I think now, obviously we have a few days in between games, I think it's just a matter of getting all that back," he said. "Getting your conditioning back to where it needs to be. And at the same time, hopefully as a team, you can have some good practices where you kinda gel again, where you get back to doing the right things in terms of execution and all that stuff.

"But then again, like you said, later in this month we have seven days without games or practices. It's definitely something different than when I came into the league, or when you were a kid, you would never have that many days off from playing or skating. But I think as you do it a couple times, you kind of realize it's not that big of a deal."

Speaking of that losing streak, the Caps traded blows with the Hurricanes in their 6-4 loss last Saturday, but that was only after falling behind the eight ball, going down 2-0 early. The same story played out in their 4-3 loss to the Islanders on Tuesday, only in this one, the Caps rallied with three straight goals to take a 3-2 lead in the second period. The next two goals went to New York, and to the victor go the spoils.

What's been the biggest difference for the Caps on this two-game skid?

"I think coming back being down 2-nothing, to come back 2-2, and then we're up 3-2 all of a sudden, and then a couple shifts after we let them get back in the game. I just think it was uncharacteristic by us. I think we're a team that, once we get the lead, we should play pretty well with that lead and not give the other team any momentum or any easy chances."

"And I think that's been the problem," he said. "We haven't really brought our A-game here as of late, so it's time to do it in the next game. I think it just comes down to every single line feeling good about the way they play, skating a lot and just being aggressive all over the ice."

You can hear Hagelin's appearance at the 32:53 mark below.