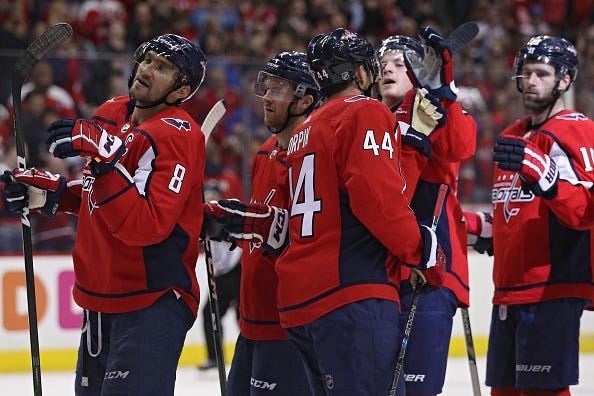 The Washington Capitals are only 16 wins away from winning a second straight Stanley Cup. The problem with that is winning 16 games takes a complete focus, sacrifice and hunger that may have been lessened by winning it all last year.
In part one of our series we featured the seven most critical individuals to repeating. Now, we focus on the team elements and other burning issues.
Penalty Kill: The Capitals were awful on the penalty kill for a good portion of the regular season. They finished 24th in the NHL at 78.9%. The only team in the playoffs that was lower than the Caps were the Colorado Avalanche at 78.7%. Not exactly encouraging.
However, the Caps made two significant moves at the trade deadline to boost the unit. They added Carl Hagelin and Nick Jensen, who are both key contributors in that area.

A huge part of the Caps' problems during the regular season, in particular during a seven-game losing streak in January, was allowing too many power play goals, but the problem was generated by taking too many penalties.

The Caps were 11th highest in the league with an average of 8:54 penalty minutes per game. They committed the seventh most penalties during the regular season (313) with 281 minor infractions, sixth most in the NHL.

For comparison, the Tampa Bay Lightning took the most minor penalties in the league, but were the best penalty killing unit in hockey at 85%. The Caps were not.

The Carolina Hurricanes have the 20th best power play at 17.8%, so on the surface, the Capitals should be able to counter the Hurricanes attack with the extra man.

Staying out of the box is the most important item on the agenda for Todd Reirden’s group, but they are clearly better equipped to handle the problem now than they were before late February.

During the Stanley Cup run last year, the Caps were at 76.0% on the penalty kill after a rough start against Columbus. They allowed a conversion clip of 50% in two losses (4-of-8) to start the playoffs and then clamped down, at one point killing 22 consecutive power plays.

Power Play: The Caps' power play currently ranks 12th in the NHL entering the Stanley Cup Playoffs at 20.8%. That’s nowhere near efficient enough, and if the Capitals are to repeat or even make a deep run, that has to significantly improve.

Last year, Washington finished at 29.3% during the 24-game playoff run to a title. To provide some context, Tampa Bay, which led the NHL in power play percentage during the 82-game regular season, finished at 28.2%.

It’s not going to be easy to start. The Hurricanes finished eighth in the NHL with an 81.6% penalty kill rate.

Part of the problem with the extra man? The Caps have at times been guilty of not being able to penetrate the offensive zone when trying to carry the puck. They would be better served by dumping and chasing. Also, at times, the Caps top unit on the power play stays on the ice for far too long trying to generate offense.

They would be better served by a better rotation to keep the unit fresher.

Faceoffs: The Caps have been awful all year on draws. That’s an indisputable fact. They finished with the worst faceoff percentage in the NHL at 45.7%. That simply must improve. General manager Brian MacLellan doesn’t usually subscribe to the theory that draws are of extreme importance, but noted their significance Monday when asked by TheFanDC.com about the problem.

“I think faceoffs are important. Puck possession is important. I’m not discounting our faceoff percentage,” MacLellan said. “It is important …We have guys that haven’t been as good as they were last year.”

One of those guys? Evgeny Kuznetsov. He’s never been good, but Washington needs him to be better than the 36.9% clip he finished with in regular season play.
During the march to a Stanley Cup last year, the Caps were 49.1% from the dot, mostly because of Jay Beagle, who was terrific and racked up a 60.1%-win mark during the title run and a 58% success rate in the regular season. Beagle is no longer with the Capitals.
Forecheck: Quite simply, the Caps are at their best when they can dump or push the puck into the corner and work to get it out by crashing down on the forecheck and creating turnovers or a contested battle for the puck. T.J. Oshie, Tom Wilson and even Andre Burakovsky have been good at this, long-term and recently.

If the Caps can win these battles in the offensive zone on a consistent basis, beyond the goal line, they have an excellent chance of going far.

Turnovers/Missed Shots: The Caps had 314 missed shots during last year’s playoff run, or an average of 13.08 per game.

Washington had 1,074 missed shots this year (fourth most in the NHL) during the regular season, or an average of 13.09 per game.

The Carolina Hurricanes had the second most missed shots in the league at 1,214, or 14.8 per game.

Look for plenty of opportunities as both teams are good in transition, but it might come down to as simple as getting chances on target.

Speaking of transition, the Hurricanes have plenty of speed, skill and ability to make you pay for mistakes. Washington had the 10th most giveaways during the regular season at 960, an average of 11.7 per game.

The point? Be careful with and value the puck. The Hurricanes can and will burn you when you make a mistake.