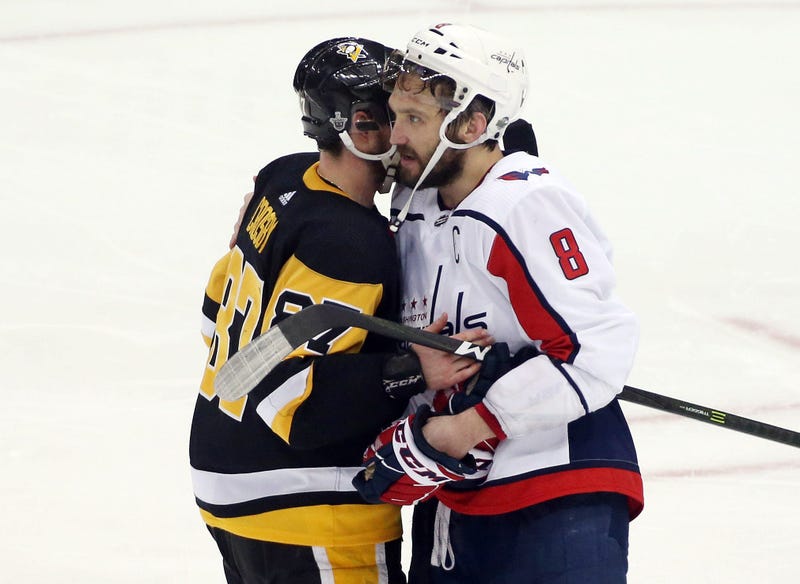 No Nick Backstrom. No Tom Wilson. No Andre Burakovsky. No problem!

The Washington Capitals are heading to the Eastern Conference Finals of the National Hockey League for the first time since 1998!

A surreal 2-1 overtime victory at PPG Paints Arena in Pittsburgh on Monday night punched the Capitals' ticket to Tampa Bay to take on the Lightning.

Evgeny Kuznetsov’s game-winning goal at 5:27 of the first overtime on a perfect feed from Alex Ovechkin sent the Caps to where their captain, a lot of the core and the coach had never been. Past the conference semi-finals and four wins away from a chance to play for the Stanley Cup.

It's the first time the Capitals have defeated the Penguins in the Stanley Cup Playoffs since 1993-94, and they did it in a building that suddenly they've had tremendous success in.

Washington won Game 3 and 6 of this series in Pittsburgh, as they did last year in the same exact round under very different circumstances. They won the Metropolitan Division title on Easter Sunday in the Steel City and once again proved to not only be road warriors but Game 6 close-out specialists.

The Flyers a few years ago in Philadelphia, the Maple Leafs in overtime last year, the Penguins to keep their season alive last season as well, the Columbus Blue Jackets two weeks ago in Ohio, and now Monday night’s game six thriller. FIVE road wins in Game Six situations over the last three years to either close out or extend a playoff series.

Say what you want about the heart of Alex Ovechkin and the curse of Washington D.C. or whatever the hell you want to say. None of it is true.

The Capitals outlasted the two-time defending Stanley Cup Champion Penguins, and for the first time in over 1,100 days, Pittsburgh lost a playoff series.

According to 106.7 The Fan's Grant Paulsen, it's been 7,277 days since a D.C. team has made the final four of a major four professional sport.

Accolades aside – besides Kuznetsov’s game-winner – how else did the Capitals do the somewhat unthinkable?

1 – They stayed out of the penalty box. Washington took one penalty, a minor to Michal Kempny in the first period and killed it off relatively easily.

In the last four-plus periods of playoff hockey dating back to the third period of Game 5, the Capitals took one penalty. ONE.

After the disastrous second period on Saturday night, which left their season hanging in the balance, that's remarkable.

2 – Braden Holtby made several outstanding saves of his 21 on the night, but none was larger than his point-blank save on Justin Schultz in the closing seconds of the second period. Holtby made other big-time saves, but that was the most important in my eyes, preserving a 1-1 tie.
3 – Alex Chiasson, a new addition the Caps, scored the first goal of the night for Washington short-side off a wrap-around feed from Nathan Walker, the Australian-born winger playing in his first NHL playoff game. Chiasson had an enormous game. He was stoned by Matt Murray on another great chance and was a constant force throughout. He won all of his face-offs in 9:27 of action.
4 – No excuses. The Capitals sacrificed their bodies. Michal Kempny had five blocks to lead the way. The Caps had 36 hits to out-physical the Penguins and they looked like the fresher team down the stretch and in overtime.
Perhaps they should have been, because the Penguins had played 301 games, entering this series, over the last three years and obviously were on game No. 307 and in overtime. We outlined this in our series preview and thought it would be a huge key, and it was.
What we didn't know then was the Caps would receive an unfair three-game suspension to Tom Wilson, still not have their second-line winger in Andre Burakovsky, and lose Backstrom for all of Game 6 and a good part of Saturday night's huge win.

They never gave up. They never quit. They never made excuses. And now they're going to try their luck in Tampa.