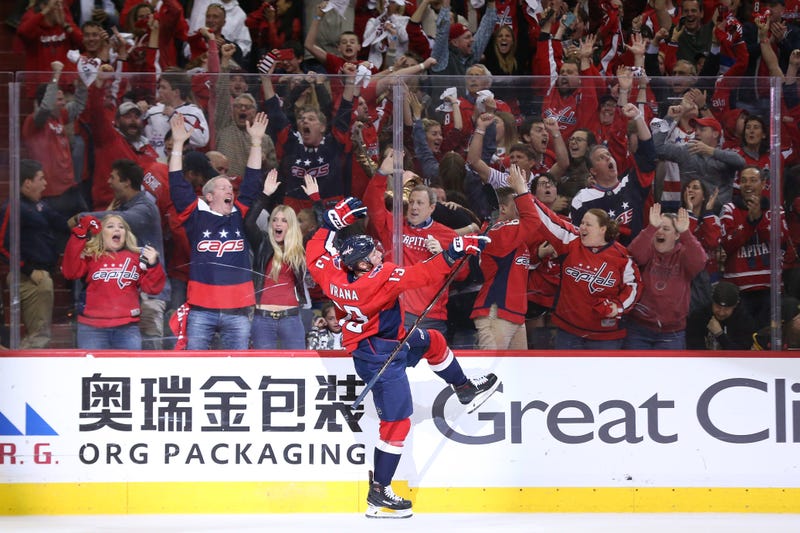 In honor of keeping the party going for as long as possible, we give you the "Great 8" reasons and moments the Capitals hoisted Lord Stanley's Cup.

Today we feature number six along the way.

The Caps advanced into the second round by beating the Columbus Blue Jackets in six games. They split the first four games against the two-time defending Stanley Cup Champion Pittsburgh Penguins.

Game 5 on a Saturday night in early May brought an enormous test for Washington in the nation's capital. They were flat in Game 4 and with a loss at home, could be facing elimination, yet again.

The Caps went up 2-1 after the first period, on goals by John Carlson and Brett Connolly. That's when things went from tense to awful.

Pittsburgh dominated Washington in the middle frame with Sidney Crosby and Patric Hornqvist scoring as the Caps could not stay out of the penalty box. Both goals came on the power play and the Caps were suddenly down 3-2 on the scoreboard, in danger of going down 3-2 in the series.

It was probably their worst period of hockey in the playoffs.

Needing a quick answer, it was "Fly, Kuzy, Fly!" early in the third, as Evgeny Kuznetsov raced in for the game-tying goal :52 in. The Caps suddenly had new life.

The man who set that Kuznetsov goal up, Jakub Vrana, would soon be heard from again. Only in an even bigger spot.

This time, it was Braden Holtby's great save igniting Kuznetsov's rush to Alex Ovechkin, and Vrana banging it home for what would be the game-winning goal with 4:38 left.

The Caps would add two more insurance goals and not allow another shot-on-goal by the Penguins until seconds remained on the clock, showing a rare killer instinct. They put their foot on the gas and never let up.
The Countdown
Moment 8
Moment 7
Moment 6
Moment 5
Moment 4
Moment 3
Moment 2
Moment 1
Follow Chris Russell on Twitter