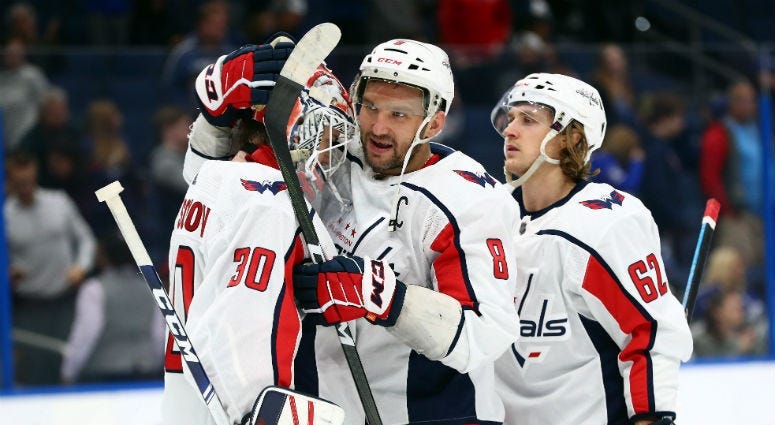 The Russian-born Samsonov, 22, is in the midst of just his second season in the United States, coming over to join the Hershey Bears in the AHL in 2018-19, years after being selected 22nd overall by Washington in 2015.

"I actually thought it was gonna be a lot different from the time that he rolled into camp this summer until now," Capitals defenseman and alternate captain John Carlson told Chad Dukes during his weekly 106.7 The Fan appearance, presented by The Purple Heart.

"I think his English is really good right now," he said. "I know a lot of other guys have gone through similar moves in trying to learn different languages. It's not that easy for anyone. I think he's done an amazing job."

Samsonov is helped, perhaps, in assimilating by having fellow countrymen Alex Ovechkin, Evgeny Kuznetsov and Dmitry Orlov, just as Ovechkin helped bring Kuznetsov along when he arrived stateside during the 2013-14 season.

On the ice, Samsonov has been a dream, going 9-2 in relief of Braden Holtby, with a .914 save percentage while averaging 2.39 goals against. As we've written about here previously, Samsonov's success could determine whether the Caps re-sign Holtby, and that could decide if there's money left over to lock Nicklas Backstrom up for the rest of his career.

"I don't know if he's getting lessons or what," Carlson said. "But he talks fine English now, I would say, and certainly good enough English to communicate anything that we would need to talk about on the ice, whether it's people in front, people left, behind our defense or just kind of telling him where to put the puck on some breakout stuff."

"He's been great for us in the net, but also I really like how hard he's tried to acclimate to the U.S. and learn the language and all that," he said.