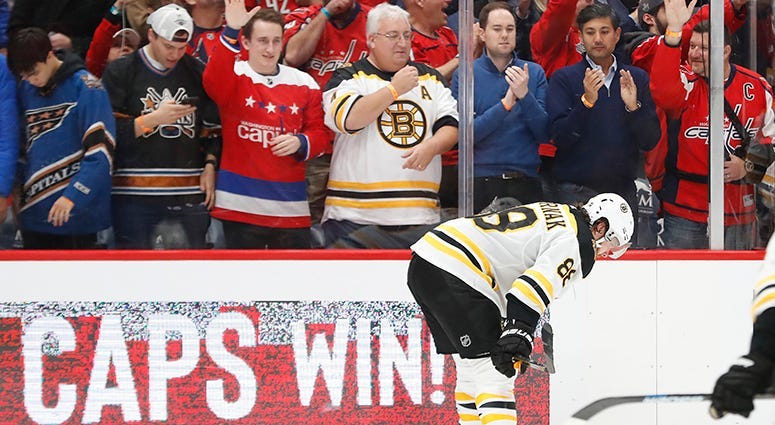 Jeremy Jacobs owns the Boston Bruins in title only, because the Washington Capitals have made a habit of beating them into oblivion for the last six seasons.

On October 11, 2014, nearly three months before they'd meet Chicago in the Winter Classic at Nationals Park, the Washington Capitals blanked the Bruins 4-nothing in Boston. In 16 meetings since, the Bruins have won one game against the Capitals. Just one.

Last Wednesday, the Caps extended their six-season streak of dominance over Boston with a 3-2 win at Capital One Arena, Washington's 16th win in their last 17 attempts. Braden Holtby, whose career as a full-time starter blossomed at the start of this stretch in 2014-15, has defined the Caps' ownership of the Bruins.

"Holtby's career numbers: he's 18-3 against the  Bruins," Grant Paulsen told Caps winger Carl Hagelin during his weekly 106.7 The Fan appearance, presented by F.H. Furr. "I've never seen anything like this."

"Neither have I," said Hagelin.

Hagelin has spent the better part of his nine-year NHL career playing on the east coast. Save for two partial seasons played in Anaheim and Los Angeles, Hagelin – between his time with the Rangers and Penguins – had faced Boston 22 times prior to last week, his first time playing the Bruins as a member of the Caps.

"I think Boston is one of those teams, wherever I've been, it's been one of the toughest teams to play," Hagelin said. "You usually go .500 at best against them throughout a year."

"It's a pretty remarkable stat and it shows that that's a team that I guess we get up for those games," he continued. "Obviously Holtz played great against them. And it was my first time playing Boston as a Cap, and it was a lot of fun. You could see it was a playoff atmosphere at Capital One (Wednesday) and we're happy to get those two points. It's definitely fun to be out there."

It's the type of stretch opposing fanbases remember with horror for decades, like how Redskins fans still can't shake dropping 14 of 15 games to Dallas, a horrific stretch for Washington that reached its nadir at 10 games and would ultimately span eight seasons (1997-2004).

The Redskins were finally able to win consecutive games against the Cowboys in 2005, which required a Herculean effort from newcomer Santana Moss, memorable enough it earned him the nickname 'Cowboy Killer' for the rest of time.

Washington's last loss to Boston came in February of this year, a 1-0 defeat at Capital One last season. The Caps have outscored the Bruins 51 goals to 26 during this 16-1 span.

"To me, the real difference make is Braden Holtby," head coach Todd Reirden told The Sports Junkies. "This, I have not seen – a goaltender play this well against one specific opponent night in and night out of us playing them. He's been our answer when we do have some breakdowns. It's something I haven't seen before... against a team that's one of the tops in the league pretty much every year."

Boston gets its next crack at Washington – and final one of the 2019-20 season – at home on December 23. If the Bruins lose, that albatross hanging around their necks will drag them into a seventh season.