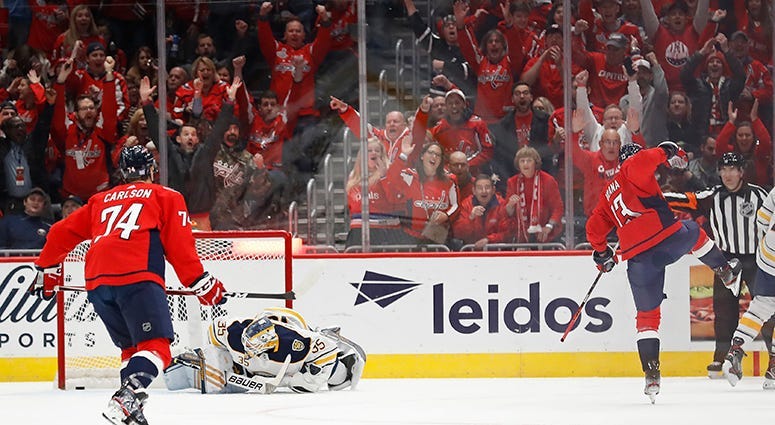 The 2019-20 Washington Capitals win at home (5-1-3) and on the road (9-1-1). No opponent is too pesky and no deficit too great. The Caps are playing free and clear with nothing to lose, and they're showing shades – albeit still with a ways to go – of their 2018 Stanley Cup championship form.

Dating back to their Oct. 16 win over Toronto, the Caps had come away with points in 13 straight contests – with only two losses to show for it – coming into Friday.

With Carl Hagelin scratched – both from his weekly 106.7 The Fan appearance and Friday night's game against Montreal – due to an upper-body injury, Jakub Vrana chipped in, filling in for his Caps teammate on the radio. Vrana called up Grant Paulsen and Danny Rouhier on Thursday, courtesy of F.H. Furr.

"I mean we have lots of confidence obviously when you're winning games like that," Vrana said of their surge. "It gives lots of energy to the group and we just believe in ourselves. Like you said, once we're down a couple of goals, we still believe and we're just having fun, so it's good to see."

Coming into Friday, Vrana had 17 points on the season on nine goals and eight assists, including a hat trick against Calgary on Nov. 3.

Washington's second line, which Vrana shares with Tom Wilson and Evgeny Kuznetsov, is better than most teams' top lines, tied for eighth in the league in scoring production.

"We are – all three – we are pretty good skaters. Plus, we can bring that physicality to the line with Tom and obviously Kuzy is a great playmaker. You know, I'm trying to shoot as much as I can, and then we're just filling some spots like that and it's worked out, and we have a good chemistry together, so that's huge."

"He's a great playmaker. He's giving us a spark," he added. "It's just great to see. Yeah, he almost got that hatty too. It's nice to see how guys have confidence right now and to also be part of our winning streak right now."