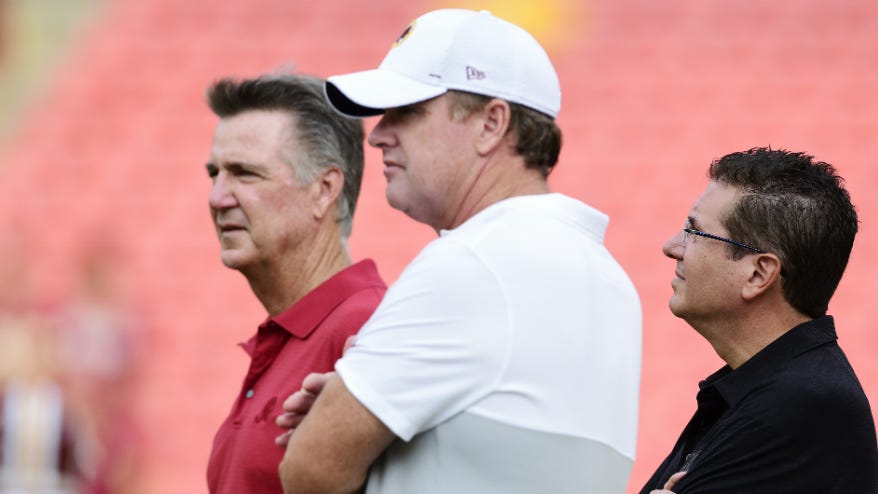 Former Washington Redskins head coach Jay Gruden said the conversation on the morning of Oct. 7 between him, team president Bruce Allen and owner Daniel Snyder was a short one.

"It was pretty brief," Gruden told Grant Paulsen and Danny Rouhier Friday on 106.7 The Fan about his last day as the head coach. "I had a hunch it might go on there, but I met them early in the morning on a Monday after the game and was basically let go."

Despite how it ended, Gruden left the Washington organization with no hard feelings.

On his relationship with the front office, Gruden said they had their disagreements, but that is expected with an NFL team.

"I don't think any coach unless you're the coach-GM you're gonna get your own way all the time," Gruden told 106.7 The Fan. "I think you have to communicate and at the end of the day make the decision that is best for the football team and whether they're your decisions or Bruce's or the personnel department you have to go with it and live with it and do the best you can with the people that you have."

One of those players who may not have been Gruden's top choice was rookie quarterback Dwayne Haskins. Gruden categorized Haskins as a great talent, but somebody who still needs a lot of development.

"Yeah, I think when you draft a guy like that that has one-year experience of college football you have to have some expectations that it's gonna take some time," Gruden told Grant & Danny. "You would love for him to come in here and pick everything up and jump right in the system and play cause he's a big talented guy, and you need a guy that's developed."

"Dwayne's a great developmental prospect, he's got a great skillset; he's big, strong, but it does take a while to learn the nuances of pro football from calling a play to the huddle, to getting your protection right, to get the run game checks to go through your progressions, to audible to max protection when you have to, to change your protections," Gruden added. "It takes some time. But Dwayne's on course to learn it and I think he'll be a force in pro football in due time."

Gruden said the hope was for Case Keenum to "take the job and run with it" while Haskins sat, but injuries derailed that. And some in the media said the Redskins shouldn't have thrown Haskins into action against the Giants, including ESPN's Louis Riddick who accused Gruden of setting up Haskins to fail.
"Well, that's idiotic because he was our backup quarterback," Gruden told 106.7 The Fan. "And Colt McCoy was not ready to play, he was not ready to be the backup quarterback. And Case Keenum had a bad foot and couldn't come back in the game. So our backup quarterback had to play. That's the way it is.

"Your responsibility as a backup quarterback is to get ready and put a package of plays together for him that he feels comfortable with and if you have to play, you gotta be ready to play. And unfortunately he had to play in that game and he didn't perform up to his standards, probably, or anybody's standards. Struggles are gonna happen in your first game as a pro player on the road against the Giants, so that's what happened. He had to get ready to play he's the only guy we had," Gruden said on The Fan.

Gruden also said his plan was to redshirt Haskins this year.

"I think when you're coaching quarterbacks you have to get a starter ready and that starter has to get the reps in practice," Gruden said on Grant & Danny. "Practices are only so long and the plan would be to redshirt him this year unless there was a situation where he had to play like against the Giants."

"But you would love for him to be able to sit behind Case or Colt, for that matter, learn for a year and then take off running. And that would be the plan," Gruden added.

The former Redskins head coach said as long as Haskins works at his craft and knows he has to work at, he has a great chance to be "a heckuva football player here for the Redskins."

When asked what he thinks most people got wrong about him as a head coach, Gruden said, "just about everything, probably."

"But I feel like I'm my own person and did a pretty good job with the talent that I had and did the best I could," he said. "I wasn't too easy on the guys, we worked extremely hard, the guys were focused, the guys were detailed. The notion that I was too nice and too laid back, I think is wrong. I think I was intense at times, I was hard on the guys at times. Yes, I was laid back at times, but for the most part, I did the best I could to get these guys ready to play and develop their skillset and make sure they develop into the best player they could possibly be. And at the end of the day, that was my job."

When asked about the perception he was too much of a player's coach and ran "Club Jay" and table tennis in the locker room, Gruden dismissed that idea as well.

"I know that when the players are in meetings, whether it's position meetings or team meetings, they were focused and they were learning and they were taking notes and they're working hard. And when you go out to the practice field and walkthroughs they were focused and detailed and working hard. And that's all you can do at the end of the day," Gruden said. "And then come game day, we expect them to play and perform at a high level. Sometimes they did and unfortunately, the last five games I was there we didn't perform to the standards of the Washington Redskins and that's why I was let go.

"But to blame it on 'Club Gruden' or whatever it is, is asinine. It's not even close to being true," Garden told 106.7 The Fan.

To counter that, Gruden pointed to the young defensive lineman getting stronger in the weight room, young receivers, offensive lineman, tight ends, and defensive backs who developed and "it's not because of 'Club Gruden' it's because they worked extremely hard."

Since his firing, interim head coach Bill Callahan has made some adjustments to the team, including adding referees to practice. When asked about adding referees to practice, Gruden scoffed at that notion.
"Refs at practice, well, who are they? They're not reffing on game day or reffing in the NFL, then what good is their opinion?" Gruden told Grant & Danny. "But to have a college referee come in there and throw a flag and stop practice cause a guy has a false start, I mean, what the heck we know it's a false start we gotta correct it."

Gruden added he valued Callahan's input as a coach, but "referees (at practice) I didn't really believe in a whole lot just because I didn't know who they were or where they came from. They weren't NFL refs so what was the point?"

When asked about his biggest frustration during his time with the Redskins, Gruden didn't need long to think about his answer.

"Injuries for sure," he said Friday. "And it's nobody's fault, injuries happen and people want to point fingers at the training staff, they had nothing to do with people getting hurt, they have something to do with getting 'em well. But just the overall injuries. I never really felt like we played with our aces. We had so many of our best players, but never really played or were able to play at length of time.

"It was frustrating. You only have so many key backups that can come in and replace some guys like Trent Williams or Alex Smith or Brandon Scherff when he doesn't play and you lose some guys like that it's hard to overcome that and that's a frustrating part. But we had some guys that competed. I felt like I had a hand in developing some really good players over the course of my five-year run here. And like I said, injuries really took its toll on us here the last year and a half here."
Another injury Gruden mentioned was 2018 second-round pick Derrius Guice, who he believes is "gonna be a heckuva running back in the National Football League."
"It's frustrating for sure. You only have so much money and you have these contracts and when you pay somebody big-time money and those are the guys that have to produce in a huge way and they're not available, then you're asking the next guy to produce and they're not quite that," Gruden told 106.7 The Fan. "Like trading in a Lamborghini for a Honda. You're not gonna get the same car, it's a car, but it's not gonna be the same car.

"You need those Lamborghinis to perform on game day and unfortunately, we didn't have 'em in my time."

When asked about his biggest frustration aside from injuries Gruden didn't need long to answer, either.

When asked if he regretted any decisions on is coaching staff, including hiring defensive coordinator Joe Barry over Wade Phillips, Gruden admitted he might have made a mistake.

"The hiring of Joe Barry over Wade Phillips was my decision," Gruden told Grant & Danny. "Wade Phillips is obviously an older gentleman and a well-established football coach. But I thought Joe Barry brought some youth and could handle a lot of things that we had going on here and I had a history with Joe Barry."

"I mighta made a mistake there," Gruden said, "But I still think Joe Barry is a heckuva football coach."

Gruden revealed the hiring of Greg Manusky was a package deal with Jim Tomsula and he "thought the two of them together was a great package."

"I thought that would be a great combination," he added. "Unfortunately, our defense did not perform up to their capabilities."

But despite it all, Gruden still thinks this roster could have made the playoffs if they stayed healthy.

"Yes, for sure, for sure. And the healthy is the big thing," Gruden told 106.7 The Fan. "And I don't know if you can take away a starting quarterback, a starting running back, a starting tackle, a starting tight end of Jordan Reed's caliber and say, 'Go ahead and win the Super Bowl.'"

The last question asked to Gruden was whether he would recommend a candidate consider taking the Redskins head coaching position?

"I'll tell them to take the job, man, it's a great job. Really," Gruden told Grant & Danny. "They pay you well, they treat you well, it's a good organization, man, and they have some great young talent on this football team. And if you have a chance to come over here and coach Daron Payne and Jonathan Allen and Ryan Kerrigan on defense and Landon Collins and Brandon Scherff on offense and you have a young quarterback that might be able to develop, why not? Take the chance, man. It's a great opportunity to be in the NFC East and a great franchise."