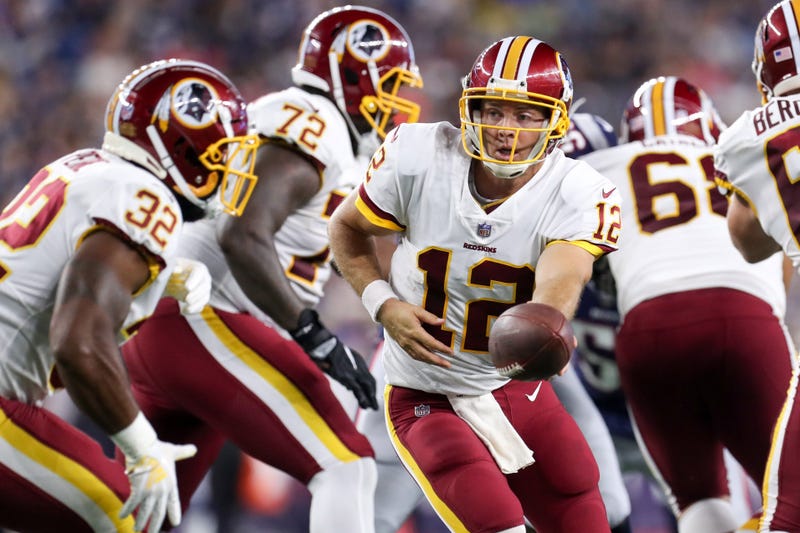 When the Redskins announced Derrius Guice would miss the entire season with a torn ACL, there was speculation Washington would be in the market for a veteran running back to take over the starting job which many assumed Guice had locked up already.

However, Jay Gruden put all that talk to rest on Saturday, telling reporters he's confident in the backs the Redskins have already.

"We drafted Derrius because he was the best player, we thought, at the time of the draft," Gruden said at his pre-practice press conference in Richmond. "We thought he could really help our football team. Not because we weren't satisfied with the backs we had, we thought he’d be a heck of a player for us."

"With Rob (Kelley) and Samaje (Perine), and what Byron (Marshall) did the other night, those flashes that he showed. Obviously Chris Thompson, Kapri Bibbs had a couple big hits. I think we are pretty good at the running back spot."

Gruden didn't reveal who is at the top of his running back depth chart with Guice now sidelined, but said he's liked what he's seen from both Kelley and Perine so far in training camp.

"I’ve been impressed with both those guys," Gruden said. "A lot of talk’s been on Derrius, and deservedly so. He’s had a great camp and OTAs. But Rob Kelley has lost a little bit of weight and he looks quicker in the hole to me. And Samaje just looks more comfortable to me. He had a couple nice hits in the game the other night. Powerful, low to the ground runner. I think those guys are good backs."

"We just gotta figure out if we’re gonna use both of them on game day, if Byron Marshall’s gonna be up, Chris Thompson. We have a lot of work to do before we decide who’s gonna be our number one back, or our feature back, or who’s dressing on game day."

Gruden acknowledged not having Guice is certainly a major loss, but said they have the talent necessary to compensate for his absence.

"I think a lot of people are disappointed. Derrius is a great personality and showed flashes of what kind of special back he is gonna be, he will be. He’s still gonna be that guy once he rehabs it and gets better. He’ll be a hundred percent and then some when he gets back."

"However, I don’t think anybody’s gonna blink now that he’s out. Obviously we do have the next man up mentality, and that next man up or men up — we can do it by committee. ... We’ll have it covered, no problem. But we are disappointed."