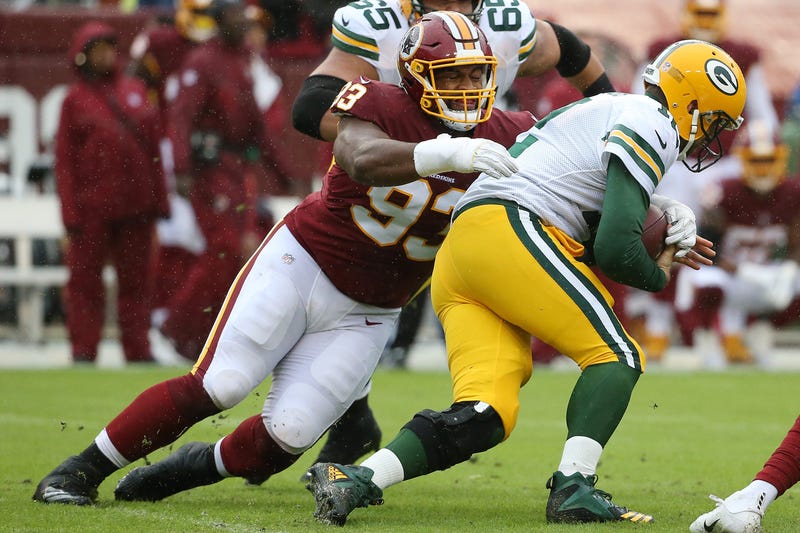 Bushrod joined 106.7 The Fan's Grant Paulsen and Danny Rouhier in New Orleans the day after Monday's game and was asked for his thoughts on Washington's defensive line. Specifically, Bushrod was asked to comment on Daron Payne, Jonathan Allen and Matt Ioannidis.

"Tough. They're tough against the run," he said. "When you watch the two young guys you have in the middle, and like you were saying, Ioannidis, they all do something really well. And the two young guys you have, they're very strong at the point of attack. Great with their hands. They work the edges really well. And like you said, Ioannidis is tough. Like, he fights to push the pocket."

"We have some stout guys in the middle who held their own pretty well," he said. "With those three you have and then the two guys you got on the outside, it's a lethal combo. We were looking at the film and we knew we had a big test in front of us this week. We had to do whatever we had to do.

"The guys up front for us, they played their behinds off and kept these guys off of Drew, but we knew the caliber of players they were and what they brought. It's all about the whole offense playing as a whole and making sure that we don't have to hold the ball any longer, and our specialists did that last night."

Gruden knows what he has in the two first-rounders from Alabama, Payne and Allen, saying Wednesday "you can build around those two cats for a long time."

"They've been good. They've been really good. They play well together," he said. "I think we've got to push some more. We've got to get more from them, you know, they are two first rounders.

"They've got some production in the sack department, they played good against the run, but we need them to play great against the pass. We need more pressure on the quarterback, but I love where they are, as football players and as men. They are two guys that I never have to worry about, 'Hey, hustle. Hey, run to the ball.' These guys are always playing hard, playing fast, playing physical and you can build around those two cats for a long time."

Now that we've seen them produce together on the field, the future is bright for a youthful D-line consisting of Payne, 21, Allen, 23, and Ioannidis, 24. The latter, a fifth-round pick out of Temple in 2016, leads the way with three sacks on the season, while Allen and Payne have two apiece.