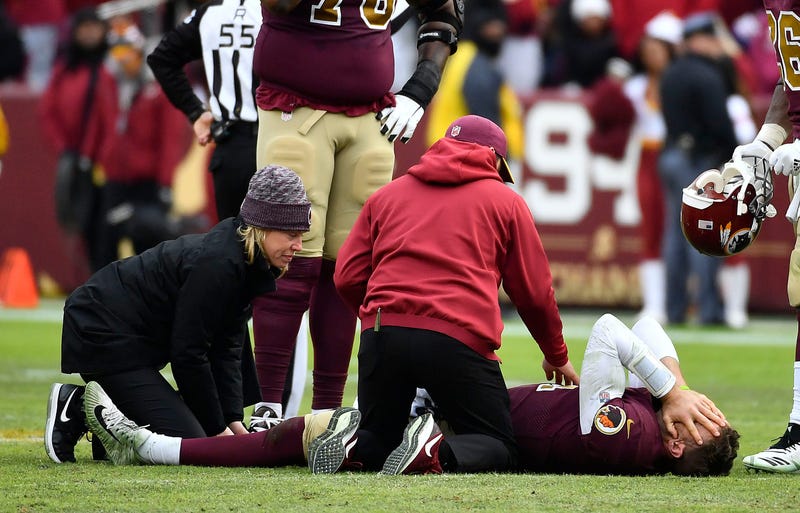 As Redskins fans saw Alex Smith break his leg in Sunday's loss to the Texans, it was instantly compared to Joe Theismann's career-ending injury 33 years prior.

Turns out, they were several more similarities than just the date and type of injury.

Appearing on Chad Dukes Vs. The World Monday, Theismann discussed how uncannily similar Smith's injury was to his own, and the affect seeing it happen to another Redskins quarterback had on him.

"It was surreal. When you look at all of the coincidences regarding both of us — I was 35, Alex is 34. I believe somebody pointed out to me this was his 166th game, I think I got hurt in the 167th. The score was the same as the game, 23-21. Basically the same place on the football field.""All of these things happen that are just amazingly similar. When I saw it — I never saw my injury until 20 years later after I was hurt — they had a shot of Alex's leg, and I still have that image in my head. I didn't sleep last night, to be honest with you."

"It was a little more disconcerting than I thought it would be," Theismann continued. "I feel terrible for him. This whole thing is certainly not about me by any stretch of the imagination, I guess I'm sort of the yard-mark that you compare it to, because everything is so similar."

"Both of us played the same position, it happened 33 years ago, and then all those other things that happened that are very similar, you almost say to yourself: 'The odds of something like this happening are greater than you could possibly even calculate.'"

More details came out Monday evening regarding Smith's injury, which appears even more serious than previously thought. As of now, the timetable for recovery is six to eight months.

Alex Smith suffered a compound fracture - meaning the bone broke through his skin, per source. Trauma surgeons discovered Smith suffered a spiral fracture in his leg - defined as a long bone broken by a rotational force. Smith, 34, faces a lengthy rehab process to try to return.

In the meantime, Colt McCoy is now the Redskins' starting quarterback, with veteran Mark Sanchez signed Monday to be his backup. Theismann has faith in McCoy to keep the Redskins offense ticking during his time under center.

"Colt's been in this system as long as the coaches," Theismann told Dukes. "He's the only player really that's been there all this time and ready to go. He's a consummate professional, always in early, always in the weight room, always working late. Colt's ready for this."

"I think he'll do an excellent job. I felt like, when Kirk was having his issues and questions about whether he'd be here, if Colt was going to be the quarterback, we'd be fine. And I still believe we'll be fine at that position."