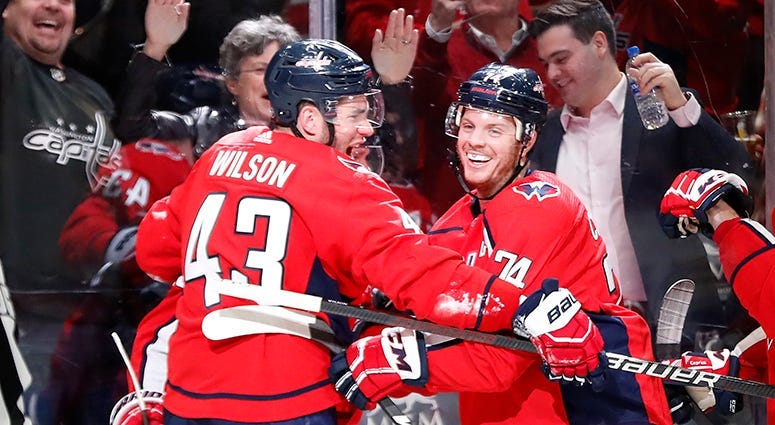 No injury had tested the Capitals' depth this season quite like that of Nicklas Backstrom, the lifeblood of Washington's offense for the past 13 seasons.

Still, Washington won six of the eight games it was without Backstrom, only losing in regulation to New York and in a shootout to Vancouver.

It didn't take long for Backstrom to make his presence known in his return game against Columbus, tallying two points on one goal and one assist in the 5-2 loss. Backstrom registered three more points (1 goal, 2 assists) over his next two games against Boston and Tampa Bay, reminding the Caps what they were missing in his absence.

His return signaled another thing for the Capitals: For the first time this season, they were finally at full strength.

"He didn't seem to miss a beat, to be honest," John Carlson told Chad Dukes during his weekly 106.7 The Fan appearance, presented by The Purple Heart

"You know, I've missed a few games here and there and it never seems as seamless for me when I'm coming back," he added. "He's a big part of our team, he always has been and it's nice to have him back, even though we had a little bit of a dud there. In the long haul, he's gonna be awesome for us."

For his own part in the Caps' unscathed run through California, Carlson earned first star of the week honors from the NHL after scoring six points – on three goals and three assists – including two game-winners.
With 45 points (12 goals, 33 assists) through 34 games, Carlson continues to put together an impeccable resume for the Norris Trophy.

"Talk to me about when you get the first star of the week," Dukes said. "I mean, your accolades are piling (up). I'd love to see the trophy room at some point. Do you get a plaque for that? Do they send you an edible arrangement? What happens? Like what do you get in the mail from the NHL?"

"Absolutely nothing," Carlson said through laugher. "You just get a sign at practice or whatever and that's it."

"Not a honey baked ham or anything?" Dukes reacted. "That's ridiculous."

"I want to send you the chocolate-tipped one, at the very least, for God's sakes," added Dukes.

"That would be an add-on," Carlson noted.

"Yeah, I think so. It's like an extra three or four bucks," Dukes informed him. "I think you're worth it."

Carlson was asked why he believes the Caps have matched up so favorably against Boston, who they beat again last week, 3-2, for their 16th win in their last 17 meetings (dating back to Oct. 2014).

"Yeah. I'm not quite sure," said Carlson. "I think obviously they maybe had only one, I would say, underperforming year as a team. They've been pretty good for at least my whole career, I would say."

"I think it's a confidence thing on both sides," he said. "I think for us, we've had that much success and we have those good feelings going into a certain building, or maybe a little bit of a mental edge when you do have so much success against a team, and on the flip side for them, they're probably trying to battle through that.

Braden Holtby – whose 18-3 lifetime record against the Bruins includes a .944 save percentage and 1.82 goals against average – has been the most pivotal piece to Washington's dominance in the matchup. That doesn't include the first playoff experience of Holtby's career, where he went 4-3 to lead the Caps past Boston in the first round of the 2012 Stanley Cup Playoffs. Holtby posted an impressive .940 save percentage in that series.

"Holtby has been amazing it seems every single game," said Carlson. "I think in his first year, in the playoffs we played them, and he played lights out and we beat 'em. Maybe that has a lot of mental carryover for him, that he just seems to stand on his head all the time as well."