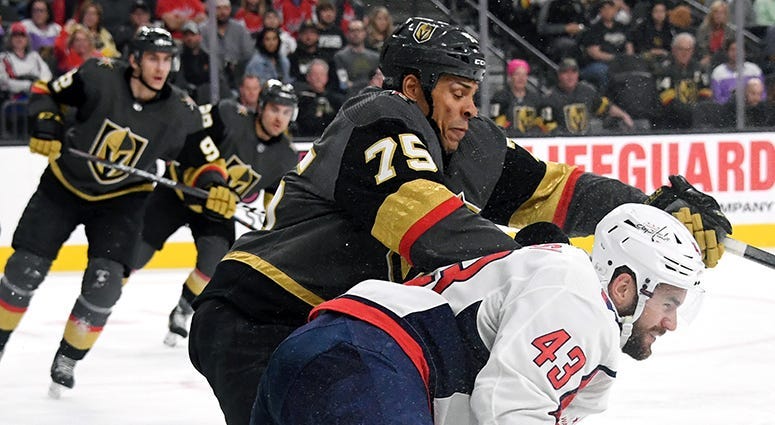 The Capitals play just 12 games in the short month of February, the least of any team in the NHL.

Thus far they haven't fared well, dropping five of their first seven games, with three of those losses coming at home. While it's possible extra days off could lead to lethargic play, John Carlson says that's probably not the case for the Caps.

"I don't think so," he told Chad Dukes during his weekly 106.7 The Fan appearance, presented by The Purple Heart. "I think from a lot of people's standpoint, I think it would probably only help you to be a little bit fresher, have a lot more time to practice and start taking care of some of these areas that we haven't been great at.

"But yeah, as a player, when you suit up for a game and things are going well, you want to keep playing," he said. "And certainly it is nice to at least have some days in between. I guess maybe not in terms of meetings and players getting chewed out and all of that sort of thing, but just in general to kind of have a longer reset button before you get to go at it again."

The Caps' play in February fits within a larger trend that's seen them drop 10 of their last 20 games. Their .500 winning percentage in that stretch is a far cry from the .709 clip they were performing at in their first 31 games.

As Craig Laughlin recently warned on The Fan, "Longer trends in sports are harder to break than these little, short spurts and problem areas. They can be corrected by coaching, but right now this is a real concern to me."

How do the Caps snap out of it?

"Usually it's an effort-based thing, I would say, and there's obviously a little bit of that that we need to clean up," Carlson said. "I just think there's a few systems breakdowns. I mean, there's been a lot of goals, so there's a lot of different stuff going on."

There certainly have been goals aplenty. In that same 20-game stretch, the Caps have averaged 3.4 goals against, while allowing four or more goals on nine separate occasions.

"But I think as a whole, just taking care of the puck would be the first thing," Carlson said. "I think we've turned over way too many pucks, whether that's trying to get out of the defensive zone or whether that's trying to get it into the offensive zone. Transition feeds a lot of these teams and we haven't done a good job kind of just making the simple play when it needs to be done and advancing the puck where it needs to go."