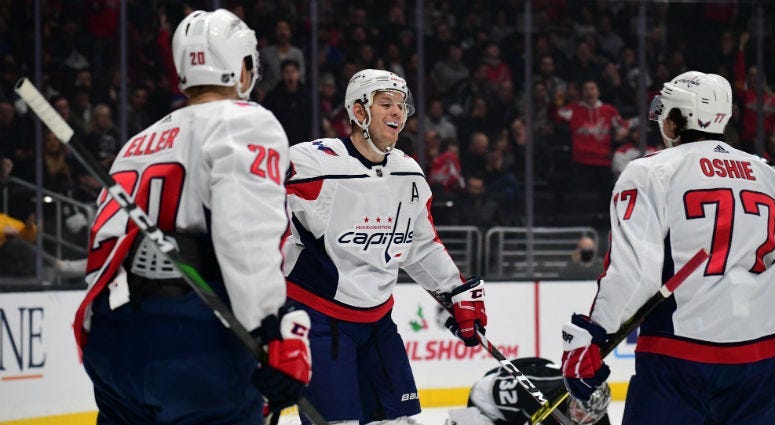 If the 2019-20 NHL season ended today, Capitals defenseman John Carlson would be a lock for the Norris Trophy.

But perhaps there's a bigger prize in store for the Caps' points leader.

Carlson ranks sixth in the NHL in points with 43 (11 goals, 32 assists), 15 more than the next closest defenseman, Dougie Hamilton, who figures to be second in line for the Norris at this point.

Carlson notched six points over the first three games of December, his biggest output – a three-point game on one goal and two assists – coming in last Tuesday's 5-2 regulation win in San Jose. All three of those points came in the span of three minutes in the first period, helping the Caps take a 3-1 lead into the first intermission.

"It was certainly a nice way to start the game for myself personally and the team," Carlson told Chad Dukes of the performance during his weekly 106.7 The Fan appearance, presented by The Purple Heart. "Pucks just seemed to kind of find my stick and I made a couple plays with it."

Carlson scored two more goals the very next night, the difference in a 3-1 win over the Kings in Los Angeles. Both came in the first period.

Much like in other sports, Carlson acknowledges there's a distinctly unique feeling coursing through a hockey player's veins when they're 'on' like that.

"Yeah, I think definitely," he said. "We always talk about confidence and how important that is for a first-year player or a veteran guy, and I think when things are going well, you certainly have that added jump. You just feel so much more comfortable with the puck on your stick, looking to make plays or take advantage of a scoring opportunity.

"I think that's probably across all sports, but it seems like in hockey, confidence and momentum are huge things and if you can ride it, that's great."

Chris Pronger is the last defenseman to win the Hart Memorial Trophy, tallying 62 points on 14 goals and 48 assists and with a plus/minus of 52 in the 1999-2000 season. Carlson will obviously blow that production out of the water, provided he stay healthy. Pronger finished 48th in the league in points that year.

The league valued different things back then, and surely Carlson couldn't win the Hart while playing on the same team as Alex Ovechkin, whose 20 goals scored are second in the NHL behind David Pastrnak's 25. But maybe it's not such a crazy thought, either.

The Professional Hockey Writers Association determines the Hart Memorial Trophy winner at the end of the regular season, awarding it "to the player adjudged to be the most valuable to his team." Certainly you could make such a case for Ovechkin, but who on the Caps roster is replacing Carlson – the type of versatile player who can contribute three points on offense while also getting it done at the other end of the rink – if he goes out?

On the prospect of being in the conversation for the Hart, Carlson, the consummate professional, said, "I just think there's too many great players for me to really put myself in that situation."

"But I'm just gonna go and do my job and try to keep continuing to get better, to improve myself, and whatever happens at the end of the season, that happens," he added. "I'm not gonna worry myself thinking about it day to day."