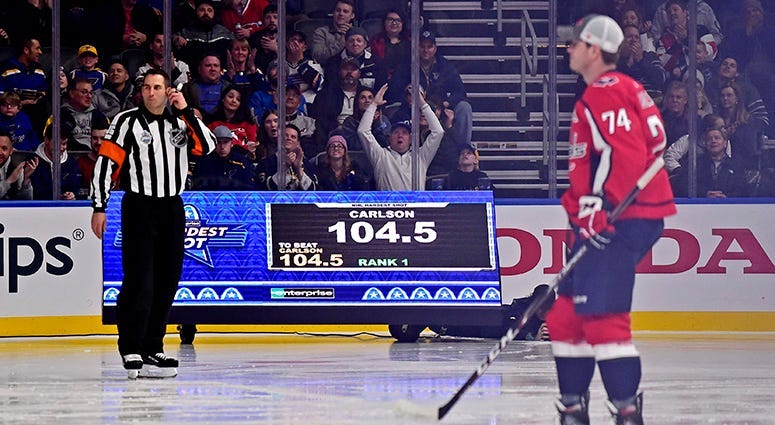 Carlson lost out to Montreal defenseman Shea Weber, who stole the show with a 106.5 MPH shot, coming within a breath of the all-time record, owned by Zdeno Chara at 108.8 MPH. It was Weber's fourth time winning the competition. He had previously won it in three consecutive years (2015-17). Carlson did finish second, topping out at 104.5 MPH.

Carlson, who had previously won the event in 2019 by reaching 102.8 MPH, reflected on the experience during his weekly 106.7 The Fan appearance with Chad Dukes, presented by The Purple Heart.

"Talk about that hardest shot competition," Dukes said. "Didn't win, but you certainly acquitted yourself well. But Shea Weber, 106-plus miles per hour. That is absolutely insane. And then you talk about Chara out there with 108.8, holding the record. I see how hard, when you're doing this and going through the process.

"The fact that guys are putting extra miles-per-hour on that shot. Is that practicable? How much smack talk goes into all of that? What type of measuring stick is that? I'd love to know how a feat like that is treated inside of your community."

"Yeah, well first, I think everybody I know going into it, that obviously he had some pretty amazing past experiences in the hardest shot," Carlson said. "And I didn't come close to that, obviously. But yeah, there's little things that go into it. I think there's technique and strength, and the type of stick you use – all that matters, I would say."

"Yeah. It was fun to be up close and personal," he said. "I know guys around the league, they were probably thinking the same thing leading up to the competition. But yeah, I don't know if there's anything you can really go home and prepare for. I think there's certain things that you might be able to tweak, just try to shoot it just a little bit harder. Technology keeps going up. I think the puck's gonna keep going faster.

"I liked his comment at the end. He said, 'Sorry for everyone that I've hurt around the league trying to block my shot.'"

As for the All-Star Game itself, Carlson joined fellow Capitals teammates T.J. Oshie and Braden Holtby on the Metro Division squad, and even scored a goal, becoming the first-ever Caps defenseman to do so in an All-Star Game. Oshie was also able to get on the scoreboard.

"You try definitely not to embarrass yourself, number one," Carlson said. "And number two, try to have some fun with it. I think we were the first game, so people were a little tense in terms of how the game was gonna play out and I think it got better progressively."

"It's fun," he said. "There was a lot of downtime but also a lot of action involved as well. A good trip. Got a few days to go to Florida before that, which was nice. It was kind of a good little warm-up, I would say, leading back out of the break."

Thanks for a great weekend St. Louis! pic.twitter.com/aJafBIzL90

John Carlson begins at the 20:15 mark below.

news
Trump refuses to concede, touts stock market as more states certify Biden win
music
Hal Ketchum dies at 67 after struggles with dementia
news
70-year-old nurse who came out of retirement to teach during pandemic dies of COVID
news
COVID-19 is changing how NORAD tracks Santa, but the mission continues
news
The U.S. could see 'well over 300,000' COVID deaths by the end of the year, warns Dr. Fauci
news
The average American would pay $305 for a normal, pre-COVID day: Survey