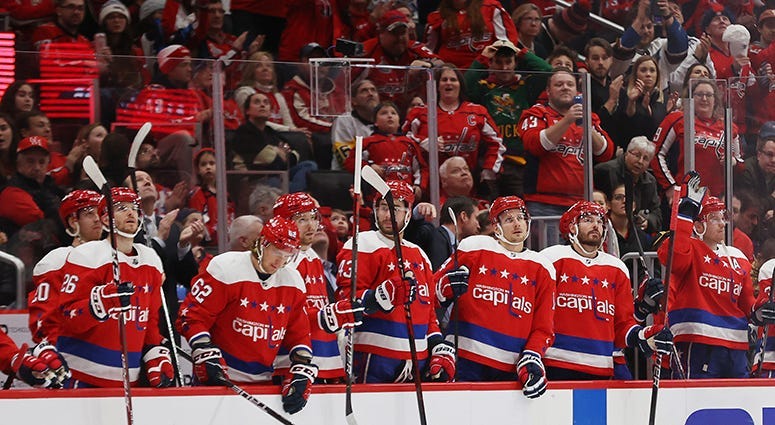 John Carlson has witnessed Capitals teammate Alex Ovechkin knock down so many career milestones, he's started becoming "a little numb to it."

But seeing his teammate of the past 11 seasons reach 700 career goals last week stood out.

"It's great. It's such a huge accomplishment," Carlson told Chris Russell during his weekly 106.7 The Fan appearance presented by The Purple Heart. "I think I'm a little numb to it, just in terms of how many amazing milestones that he's reached in the past couple years."
The Caps commemorated the moment Tuesday night with a video tribute to Ovechkin, with personalized messages from six of the seven players ahead of him on the all-time scoring list. Ovi held his young son, Sergei, as he looked up at the video board to see himself congratulated by Mike Gartner, Phil Esposito, Marcel Dionne, Brett Hull, Jaromir Jagr and The Great One, Wayne Gretzky.

"When you look at those seven or eight names that are in the 700 Club, it's pretty amazing that I've gotten to play with someone in that club for so long," Carlson said. "Yeah, it's a great thing, I thought celebrated very well by the Capitals and other teams have done some things for him as well, which was pretty sweet."

"I think as a teammate, you're just happy for the guy and what he's been able to accomplish over his career," he said. "Certainly just some amazing stuff that, I'm just so glad that he finally put that one to bed."

Carlson reached a career milestone of his own the very next game, passing Calle Johansson to become the Capitals' all-time leader in points for a defenseman, when he assisted Carl Hagelin on his third-period goal in last Sunday's 5-3 win over Pittsburgh. Carlson now has 475 points – on 105 goals and 370 assists – in his 11-year NHL career. Johansson tallied 474 points over 15 seasons for the Caps.

After the game, Carlson – in his characteristic mild-mannered way – dismissed the milestone as something he hadn't really put too much thought into, although he clarified with Russell, saying, "I think maybe my words didn't come out correctly then."

"It means a lot to me and the history of the team and all of that," he said. "I think as a player, though, it wasn't 700 goals. It wasn't something like that, that you're really maybe squeezing your stick a little bit for."

"I think just being concerned with where our team's at and what we're trying to do, I think that's kind of always been the main focus for myself," Carlson said. "But certainly to pass a guy like Calle, who's had such a great career here and done so many good things, and a great NHL defenseman, I think is awesome and something that, especially when I look back on my career, will cherish even more."