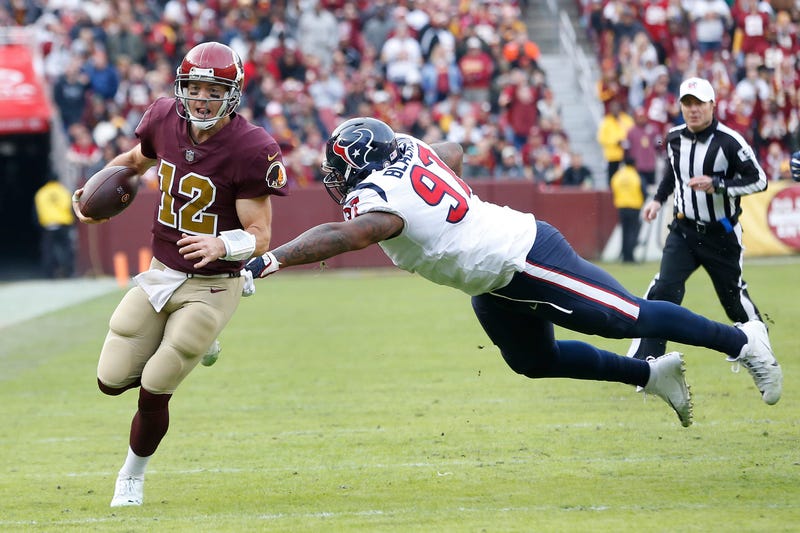 Jay Gruden confirmed the worst after Sunday's 23-21 loss to the Texans: Alex Smith broke his tibia and fibula and will miss the rest of the season.

Colt McCoy now has the keys to the Redskins' offense, and while it's happening due to unfortunate circumstances, some fans believe he could give the passing game something it had been missing with Smith under center.

John Keim thinks McCoy could give Washington a boost offensively, but his reckless style could also lead to more turnovers or another catastrophic injury.

"As much as Colt's gonna give them that jolt — and I think he can, I think he can do some things — but now it's like, what happens if (he gets injured)?" Keim told The Junkies Monday. "The way Colt plays, he plays with an abandon at times."

"I always felt he was a mixture of Kirk Cousins and RGIII: he can sit there and throw the ball, but he's also gonna take off and run with it whenever he can and try to get those yards. But what he absolutely gives you is a guy who knows the offense really well."

McCoy certainly has spent ample time learning Gruden's offense, and that knowledge showed on Sunday. He completed six of 12 passes for 54 yards and a beautiful touchdown pass to Jordan Reed, plus ran for 35 yards on five carries.

Jordan Reed runs to the corner all the way this time. Colt McCoy shows nice touch and finds him for the TD. #Redskins pic.twitter.com/4iP8lZfts8

Watching the game back on the TV copy and Colt's first pass (the TD to Reed) was so good.No all-22 on the broadcast, but it looked like. double unders and a corner route over the top aka "72 dusty"It's a play Colt has a ton of reps with. Smart call.

And beyond his abilities and experience, Keim says McCoy's on-field demeanor gives his teammates energy and confidence.

"He plays with a swagger, too, and I think that rubs off on guys," said Keim. "Guys like him and they respect him, and there's no doubt about that."

The Alex Smith injury is devastating but 11 years ago Todd Collins came off the bench to lead the Redskins to a 4-0 finish and a playoff appearance. Colt McCoy is getting a long-awaited shot. #Redskins

But in order to succeed, McCoy must stay on the field. And as Sunday showed, it just takes one play to end your season.

As for Redskins, they can win with Colt McCoy. I just wonder if he can stay healthy over six games given he runs recklessly sometimes. Redskins can't afford to lose him, too. May have to limit his urge to run.