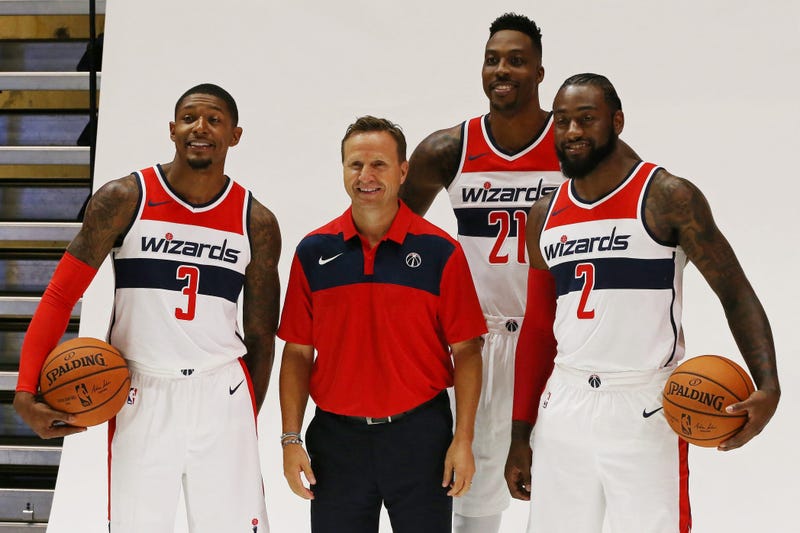 My God are the Wizards coming unglued.

Monday morning brought news – via Woj Bomb – that the 5-11 Wizards were on the verge of being dismantled.

As the Washington Wizards' season spirals, the franchise is making every player on its roster -- including All-Star guards John Wall and Bradley Beal -- available to discuss in trade scenarios, league sources told ESPN on Monday.

Washington's preference remains to reshape the team around Wall and Beal, but poor play among key teammates is limiting their trade value and paralyzing the Wizards' efforts to make meaningful changes to a roster that no longer appears functional together, league sources said.

Wojnarowski was certain to specify that Washington has not directly "shopped its All-Star backcourt," however it is "rapidly becoming apparent to the organization that it needs to start considering overtures for them."

One contributing factor to Washington considering trading its stars: Otto Porter and Kelly Oubre "fetched minimal interest" on the trade market. There's only so much the organization can do to reshuffle its jammed up books with Porter, Beal and Wall all playing on max deals.

The Wizards are facing the perfect storm of having a league high 10 free agents but $117M of committed in salary (over the cap) in 2019-20. You either retain, let go and focus on the minimum market or break up the Wall/Beal contracts into multiple players.

But this was merely the prelude to the real show. Details slowly started trickling out on Monday, indicating a recent practice had turned heated, with verbal altercations popping up across the gym.

Sources on @TheAthleticNBA @WatchStadium: The Washington Wizards had a volatile practice within recent days, with verbal altercations among players and an exasperated Bradley Beal saying toward team officials: "I've been dealing with this for seven years."

Teams have these kinds of practices, and tension always reveals itself amid underperformance. Wizards are 5-11 so far this year. Several players had verbal back and forth in this practice, league sources said. https://t.co/U79FqusKLL

Oh my, did the fireworks fly...

According to Woj, Wizards coach Scott Brooks had challenged his team in this practice to raise their intensity. Wall would fire back with a simple: "F*** you."

Story filed to ESPN: The Wizards fined All-Star John Wall for unloading a verbal barrage onto coach Scott Brooks in a recent practice. After Wall and his teammates had been challenged to raise intensity in that session, Wall fired back with "F--- you," to Brooks. Story soon.

During this same practice, Bradley Beal and Austin Rivers also got into it, resulting in Beal channeling his inner comments section of every Wizards-related blog post in town:

On Saturday, the #Wizards had this heated practice in which Bradley Beal and Austin Rivers had a verbal altercation.Beal grew heated and gestured toward Pres Ernie Grunfeld, and said something along the lines 'It starts at the top.'More details coming.

Beal and Rivers have a storied rivalry on the court dating back to their time on the AAU circuit. At Wizards media day in September, Beal told 106.7 The Fan the two "grew up with the mindset of: we're foes," although he assured they'd put their history in the rearview.

.@AustinRivers25 and @RealDealBeal23 came out of the same high school class and were often pinned against each other. Beal tells @chrismilestv he hasn’t forgotten about all the comparisons #WizMediaDay pic.twitter.com/jlodmMnxQ0

During this Thursday practice, the root of the Beal and Rivers verbal tiff: Players got into over a foul call during the scrimmage. There was no physical contact and the argument did not grow personal.I'm told the two players hashed it out afterwards for over 30 minutes.

The impetus for Wall verbally degrading his head coach seems to be a dispute between he and Jeff Green. When Brooks intervened, that's when Wall hit him with the F-bomb.

Another tidbit: Emotions and frustrations were running high during a recent game and Kelly Oubre Jr. hurled expletives at Brooks, according to someone who witnessed the tirade.Story coming soon.

Wall was inevitably fined by the organization for cursing out Brooks, Woj reports: "After teammate Jeff Green and Brooks pushed Wall and Wizards teammates to raise the level of intensity in a practice last week, Wall fired back with 'f--- you,' toward Brooks, league sources said."

Wall apologized to Brooks in the minutes after cursing him, and apologized to his teammates the following day, league sources tell ESPN. https://t.co/iih3oUT55D

While reporting this story, I've learned that in spite of Bradley Beal's heat-of-the-moment comments directed at #Wizards President Ernie Grunfeld, in which he said something along to the lines of 'I'm sick of this sh --!' ...Beal has NOT requested a trade,

Yep. This will probably end well.