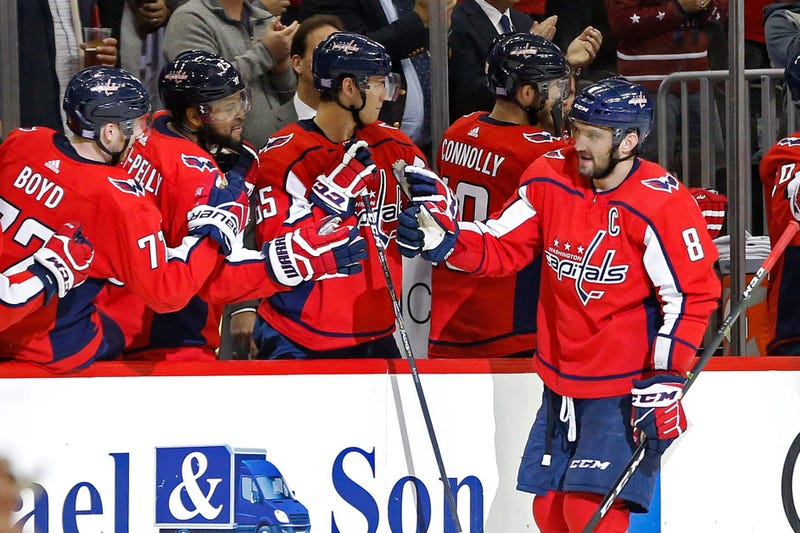 "If they've been anything, they've been consistently inconsistent since the beginning of the year," Walton told The Junkies Wednesday. "I think a lot of that has to with the fact they miss Tom Wilson, and you've got guys slotting into places they might not normally be."

"I think this team once they get Tom Wilson back — it'd be about the same time last year they started hitting stride, too. It's started kinda like last year, I'll be okay if it ends like last year, too."

No Caps fan would complain about a second run to the Stanley Cup, but with a long way to go before that possibly happens, Caps coach Todd Reirden is still searching for the perfect line combinations with Wilson out.

However, one of his most recent moves paid off well, dropping Jakub Vrana from the first line to the fourth and plugging Dmitrij Jaškin on the top line with Alex Ovechkin and Evgeny Kuznetsov.

The change paid immediate dividends, as Vrana scored the opening goal in Monday's win over Edmonton.

Boyd gets a secondary -- in his first game back, Vrana gets the goal, #Caps get the 1-0 lead!Stream #CapsOilers live: https://t.co/Wn6LWyeTGx pic.twitter.com/0bNhlHDDNh

"I think Jakub Vrana was pretty angry (about the demotion), but he comes out and shows, 'You know what? I'm gonna go out and get a goal three minutes in,'" Walton said. "I think he had the little wake-up message there."

But problems persist on the other side of the ice. The Caps have surrendered 48 goals, the ninth-worst mark in the NHL.

"They've gotten decent production from the bottom-six. The power play is other-worldly. The problem really for the Caps, and why they're basically win one, lose one here since the beginning of the season has been in their own end defensively," said Walton.

"And that's not just the (defensemen) and the goalie, that's the forwards, too. They make the adjustments they need to defensively, I think that's when things really start to take off around here."

"Turnovers are killing them," he continued. "Giveaways at the wrong time, and there isn't just one guy that's been guilty, I think just about all of them have at some time or another. When they haven't been able to push the puck from their own zone, the breakouts haven't been as clean, and then suddenly it's coming the other way on you."

But with a struggling Penguins team coming to town for a Wednesday night rivalry matchup, Walton sees an opportunity for the Caps to build some lasting momentum before Wilson returns.

"With Pittsburgh coming in, they're gonna be angry. They've lost four in a row, and they got killed the last three games," he told The Junkies.

"They're gonna come in with a little chip on their shoulder, but if you can stop that kind of offense — Malkin and Crosby have been pretty good, as they always are — it'd be a nice way to start to turn the corner if you hit that second win in a row finally tonight."