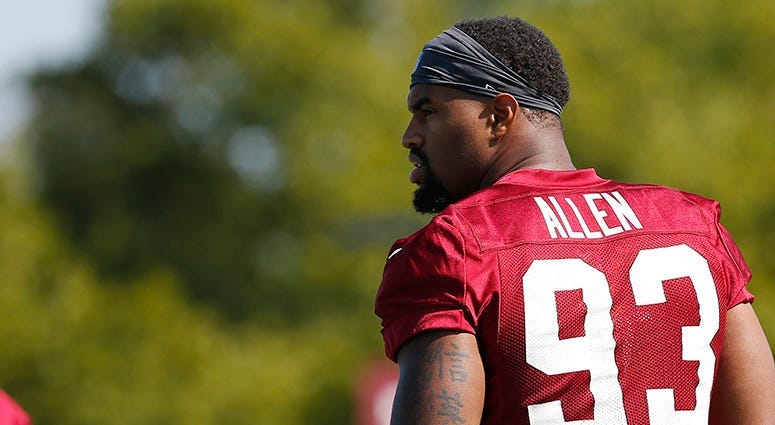 One day after their promising return, neither defensive lineman Jonathan Allen nor tight end Jordan Reed practiced for the Redskins on Thursday.
Both are dynamic players and their absence leaves a huge void on opposite ends of the ball.

Jon Allen is also not at practice. Dunbar and McKinzy are on the rehab field.

Allen, who left Washington's Week 1 loss to Philadelphia with a sprained knee in the first half, returned to the practice field Wednesday with his knee wrapped in a large brace.

Redskins coach Jay Gruden told reporters he thought Allen could use an extra day of rest coming off a "significant injury."

"No setback," he said. "We thought it was better for him to stay in today, rest it and see how it is tomorrow."

Gruden said Allen's rest day didn't have anything to do with the Redskins having an extra day before playing this week, as they're slated to host Chicago on Monday night.

"No. He had a significant injury, now," said Gruden. "We're making sure he's gonna be okay before he starts individual drills in practice. We thought today, another day of rest for him would be better suited for him than going out and practicing."

Allen does not appear to be ruled out for Monday's game just yet. "It's important that we get him back and hopefully we will this week," said defensive coordinator Greg Manusky.

Reed suffered a concussion during the Redskins' third preseason game and has remained in concussion protocol ever since.

While it's unclear where Reed is in the concussion protocol, it is clear Gruden is tired of discussing it.

"This is all part of the process of recovering from this ordeal," he said of Reed missing Thursday's practice. "We're just taking it very slowly, making sure he goes through the right process to make sure it's right before he goes back on the field."

Jay Gruden is NOT feeling the Jordan Reed questions pic.twitter.com/eDYiydEpEi

Reed, who's sustained six documented concussions during his football career, has a much tougher road than Allen to get back on the field. Since there's often confusion about the NFL's concussion protocol, here are the steps Reed must pass through before he can participate in another game, as outlined in the league's 'Return-To-Participation Protocol':

Rest And Recovery: The player is prescribed rest until his signs and symptoms and neurologic examination, including cognitive and balance tests, return to baseline status.
Light Aerobic Exercise: Under direct oversight of the team's medical staff, the player should begin graduated cardiovascular exercise and may also engage in dynamic stretching and balance training.
Continued Aerobic Exercise & Introduction Of Strength & Conditioning: The player continues with supervised cardiovascular exercises that are increased and may mimic sport-specific activities, and supervised strength training is introduced.
Football Specific Activities: The player continues cardiovascular, strength and balance training and participates in non-contact football activities (e.g. throwing, catching, running, and other position-specific activities).
Full Football Activity/Clearance: Upon clearance by the Team Physician for full football activity involving contact, the player must be examined by the Independent Neurological Consultant (INC) assigned to his Club. If the INC concurs with the team physician that the player's concussion has resolved, he may participate in his Club's next practice or game.
Here's the full rundown on Redskins injuries:

If Moreau is back, he’ll be outside to replace Dunbar if Dunny can’t go. Moreland would stay inside.Noah Spence is coming along slowly getting introduced to the defense. He’ll only go if McKinzy can’t.