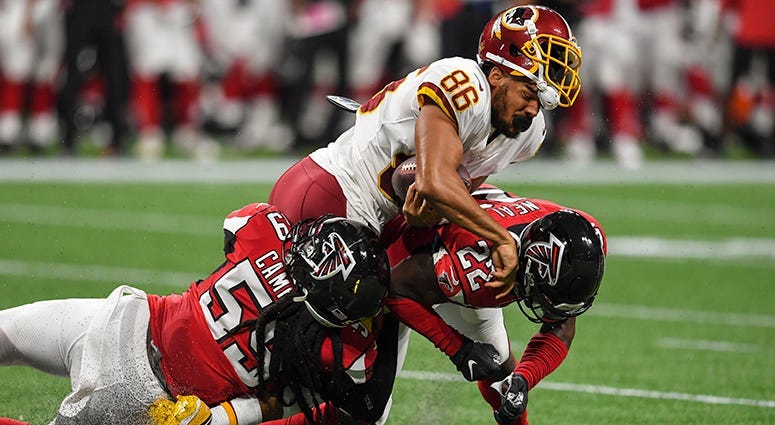 Redskins tight end Jordan Reed is in concussion protocol after taking a vicious helmet-to-helmet hit in the second quarter of Thursday's preseason game in Atlanta.

Reed was running for yards after the catch – a 10-yard gain on the play – when he was brought down by Falcons linebacker linebacker De'Vondre Campbell and safety Keanu Neal, who clipped Reed in the helmet at the point of contact. The jarring hit knocked Reed's helmet clean off.

Jordan Reed took a BIG shot to the head from Keanu Neal.15 yard penalty.Oof. Not the kind of contact you want to see guys taking, especially in preseason.(Reed popped straight up and was fine.)#Redskins pic.twitter.com/aNVpFbriOk

Reed was able to get up unassisted after the play and remained in the game for several more plays. It wasn't until after halftime when Reed started showing concussion symptoms, Redskins coach Jay Gruden said after the game, at which point Reed was taken to be evaluated for a concussion. Neal received a 15-yard unnecessary roughness penalty fo the hit, but was not ejected from the game.

"I think on that hit, he developed concussion symptoms," Gruden said. "They went into normal protocol and he was symptomatic, so we followed the protocol and there we have it."

"You know, you stand up here all the time and you start to worry about these injuries all the time," Gruden said. "These guys gotta go out and play football. They gotta practice. And it's unfortunate. Hopefully he'll be okay. I just talked to him. We just gotta go through the process, though.

"This is something that, it's out of our hands now. He's got to go through the protocol, and get to the doctors and hopefully he'll be okay. Fortunately, nobody else got injured, but it's necessary. I thought the work was necessary for our entire football team today."

Having watched the hit again, I don't know how Neal wasn't thrown out. It's a sickening hit. The kind that should be legislated out of the game.

Remember, concussion symptoms often come on later. Sometimes hours later or the next day. Not always right away. Hit was brutal.

Reed being admitted into concussion protocol is clearly concerning, given his extension concussion history, with six documented concussions in his football career.