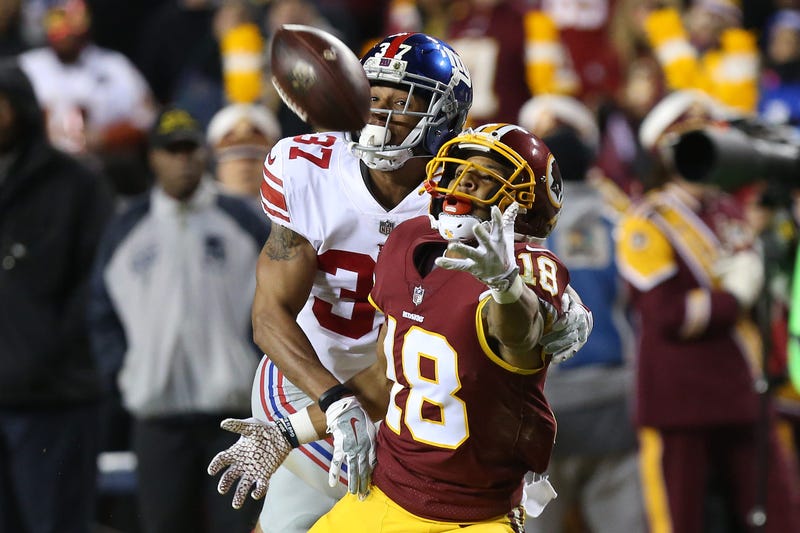 The Redskins looked dominant in their 24-6 Week 1 win over the Cardinals on Sunday, but it was not a particularly good day for Josh Doctson.

The 2016 first-round pick made one catch for 11 yards against Arizona, and was targeted just three times by Alex Smith.

After this latest quiet performance, is it time to declare Doctson a bust? The Junkies discussed the question Tuesday morning.
"I think Doctson, I think it's pretty safe to say, is gonna be a bust," Eric Bickel said during Tuesday's show. "I think it's pretty safe to say that. It's fine, it's whatever. They still have enough weapons. It's a shame, but it's not really gonna work out."
The conversation continued, John "Cakes" Auville playing Doctson's advocate.
JP: He's just a jump ball guy in the endzone.
EB: Jump ball guy, he can't beat you —
Cakes: Though that's a nice skill.
EB: D-Hall insinuated, basically, he hears footsteps.
Cakes: He can parlay that skill into 40 catches and eight touchdowns. Maybe. I mean, he had six last season.
EB: It's hard to when you hear footsteps, and you're scared. It's basically what D-Hall was insinuating.
JP: He had six last season because they didn't have other options. If the other options stay on the field, if they stay healthy and Jordan Reed and Chris Thompson —
EB: Yeah, he ain't having six touchdowns.
JP:  I'll take the under on that six.
Cakes: Look, I don't want to die on the Josh Doctson mountain. I'm not gonna do that, okay? I'm not gonna be the skeleton in the North Face jacket that people are passing up and down Doctson mountain, okay? I'm not doing it. But I'm just telling you, he's got the skillset to go up and get the jump balls. Now the problem is, Alex Smith is not a guy who loves to throw jump balls to guys. He likes the sure thing, which is Chris Thompson, Jordan Reed, Paul Richardson. Basically anybody but Doctson.
Bish: He's gonna throw to guys who are actually open.
Cakes: I agree.
EB: I think he would throw fades to him, that sort of thing. I think he would do it.
JP: He'll throw some back shoulder, every now and then.
Cakes: Six is kind of a weird number, I don't know. Maybe he gets to that number again.
The day before, the Junkies had asked DeAngelo Hall about Doctson, the retired Redskins great noting Doctson doesn't have terrific speed to create space between himself and defenders.

"Doctson's not a guy that's gonna beat you with speed. He's a guy who can beat you at the point of attack," Hall said. "He's a jump ball guy that needs a quarterback that's gonna trust him and throw that ball."

"We didn't see Alex throw it yesterday (Sunday), but Alex will throw that ball. He's thrown it to (Chiefs tight end Travis) Kelce on several occasions. I just think he needs a little more practice time, just to create that rapport with Doctson. But he's a very capable receiver, but he's just not that guy who's gonna be two steps open and leading to the endzone.

Hall then went on to compare his former teammate to some of the NFL's best receivers.

"And Doctson, I'm telling you — I haven't been around A.J. Green a lot, but playing against A.J. Green, he has those same set of hands. But Doctson is right in that category, man. I'm talking elite ball skills."

"All I keep seeing are drops!" Bickel interjected.

"I'm telling you though, he has those hands," Hall responded through a chuckle. "I don't know if he's thinking about somebody's about to hit him, or what. Terrelle Pryor caught a pass every time you put him in a game."

"Doctson has to get a little tougher I think, mentally and physically. But, I mean, the kid has all the ability in the world."

On Tuesday, the Junkies asked Redskins beat reporter John Keim about Hall's assertion that Doctson has great hands, but ends up dropping passes in games because he gets nervous "hearing footsteps" of defenders.

"If a former player who was your teammate is saying that, then I don't know what more to say," Keim said. "There were times last year that he was pretty good, and I still think you're gonna see some of that this year. To what degree, I don't know. I never looked at him as a high volume-type guy."

"I know there were things last year that he had to learn about, because it was really his first full year of games, where you have to learn about how to run certain routes. How to adjust when you get a different look on a route that you were going to run. And those are all legitimate lessons. But, again, it's not like this summer that you saw anything that said, 'Ok, wait.' I think this is a very big, crucial year for him."