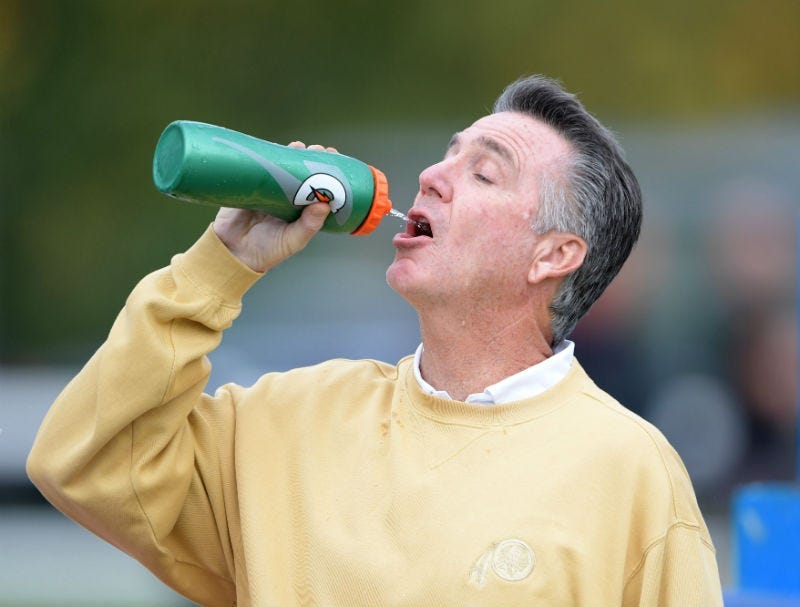 Lombardi's contempt for the Redskins president dates back to their time together in Oakland.

"Bruce has been the general manager under the disguise as a football guy," Lombardi recently said of Allen. "And let's face it, Bruce never did any football with the Raiders when I worked there. He wasn't even in the draft meetings when we were there. He never was involved in player personnel."
Lombardi took another jab at Allen during his Thursday appearance with 106.7 The Fan's Grant Paulsen and Danny Rouhier.

"So let's start with the Redskins," Paulsen said introducing Lombardi. "Your boy, Bruce Allen, who you once worked with and said you guys tried to keep out of the football operations..."

"He's running the show here in D.C.," Paulsen went on.

"We didn't have to (change the locks)," Lombardi jumped in. "He wasn't allowed. But go ahead."

Paulsen then segued into his own report from Wednesday, in which he indicated Redskins owner Dan Snyder has "taken over the first round of the draft," an accusation the team has publicly denied.

"He and Dan Snyder apparently on the business side of things thinking a little differently than the football people, Jay Gruden and Kyle Smith," Paulsen said. "What do you think when you hear that about front offices maybe not being on the same page?"

"I think what Grant talked about, that Daniel's taking over the draft, I think that Daniel's always been involved in the draft," Lombardi said. "I think Bruce has been – in the mafia, the term would be 'a buffer.' In politics, it would be 'plausible deniability.'

"But as long as Bruce runs the team, Dan has somebody to take the heat and he can still run it. So when I tweeted out yesterday that Dan's always been running it, it's really a reflection of: because he can control Bruce."

"There's a difference between us saying something, and you, who worked with him," Paulsen noted. "I think there's a credibility. When you've been in the building with a guy, when you're a football background person who's been a GM like you, and you say something, it's got more weight.

"So when we say, 'Bruce isn't a football guy. He's a cap guy. He's a business guy. He's a survivor.' People can say, 'Oh, you guys just don't like him.' But when you're in the building and you say, 'Yeah, we really didn't want him to help us pick players,' I think it means more."

"Well, he never picked players," Lombardi recalled. "I mean he wouldn't even know how to scout. I mean, I'm not the only guy. Scot McCloughan says the same thing, too. I mean anybody who's been interactive with Bruce knows he's not a football guy. I know his dad was a legendary head coach, but he never came up that way. He came up a different way.

"If you were to ask him about, 'What is the true meaning of this draft?' And 'where the fifth rusher fits in, the fourth rusher,' and the value of this draft in terms of tight ends. 'What's an F? What's a Y?' You know, you're in a conversation that he's not gonna be able to handle."

This was followed by a genuine discussion about this year's quarterback class.

"I'm not in love with the quarterbacks in the draft," Lombardi said. "I think Kyler Murray's really talented. I think he really is talented. I have real troubles with somebody who can't see down the field."

"He possesses some very good skills in terms of arm strength and size, but in terms of rhythm and timing, if he comes into the Washington offense, he doesn't really fit. That's not his game. His game is not rhythm and timing and footwork, his game is hold the ball, throw it down the field. He would be better in Joe Gibbs' old 1980 offense than he would be in Jay Gruden's 2019 offense."

"Everyone in the NFL knows Washington used 8 of its 30 visits on quarterbacks, and the trail of its research screams it wants to draft one in the first round." #Redskins https://t.co/TX0q9vE7gr