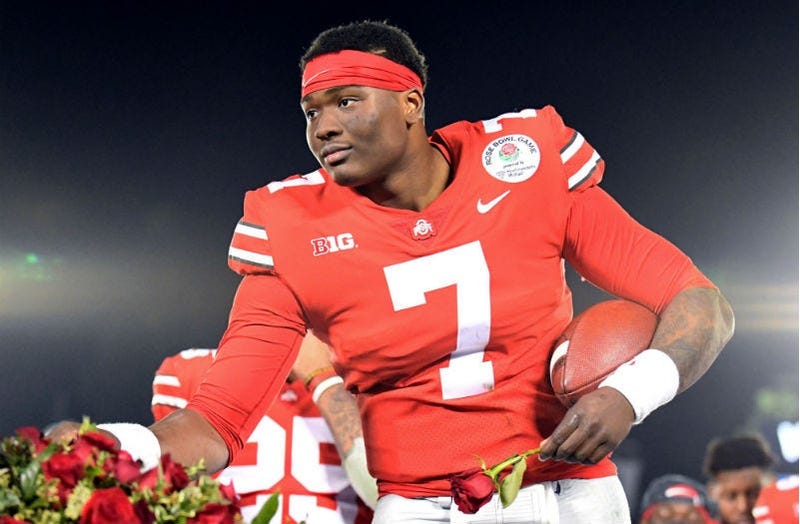 Sports hypotheticals tend to skew on lines of the absurd, so take their responses with a grain of salt.

But here's former NFL receiver Nate Burleson responding to the hypothetical, 'Would you rather start Eli Manning or Dwayne Haskins in Week 1,' on NFL Network's "Good Morning Football."

Jackson, starting the last seven regular-season games in Baltimore, helped lead the Ravens to a 6-1 record and a playoff spot down the stretch of his rookie campaign.

"So those two rookies right there," Burleson said, "they kind of stamped that: You don't have to be afraid of starting a young pup. It used to be the thought: If you're a rook, just sit, man. Just sit. Because the NFL is a scary league with big, bad grown men."

Kay Adams interjected: "I still like the idea to sit behind..."

"I know. And Kay, a part of me does too," Burleson jumped back in. "But because of that, I'm answering the very longwinded way, Dwayne Haskins. Start the young pup now.

"Go out there – I know he has a couple guys in front of him – so I'd rather have Dwayne Haskins at 21 years old, even with the potential of him falling on his face a little bit. Sam Darnold fell on his face, but at the end of the season showed us some good things."

"Well listen, I'd rather have Dwayne Haskins than Eli Manning right now," Burleson went on to say.

"Eli Manning is an NFL veteran! He won two Super Bowls and you would start a rookie over him?" said Adams, who set the hook for Burleson and is now reprimanding him for taking the bait. "C'mon, guys."

"I think the argument for Haskins is that I'd bank on the future as opposed to this," Peter Schrager amended the hypothetical to more realistic proportions.

On its surface, this hypothetical is ridiculous and thought up only to yield ridiculous responses. But the conversation does help establish the boundaries we've come to expect for rookie QBs, and fan expectations often fluctuate along these ever-shifting lines.

It wouldn't be so outlandish to think that a recency effect, of Mayfield, Jackson and Darnold all all finding relative success, could help shape the narrative for Haskins as he enters his rookie season with the Redskins.

If the fans, media and Redskins owner Dan Snyder are all like-minded in thinking Haskins is ready to be thrown to the wolves in Week 1 – whether Haskins is ready or not – then who's holding him back?