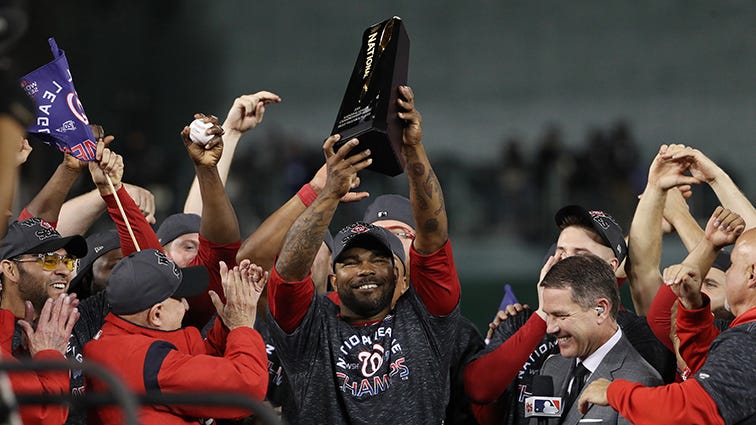 These Nationals Are Better Than Your Team is on Paper

It's hard to remember the last time happiness gripped Washington.
We're trapped in a town with all these crazy politicians while the rest of the world seemingly hates us thinking Washingtonians have anything to do with Congress and the president. Traffic sucks. I mean, traffic really sucks and it costs a fortune to live here. And don't get me started on Dan Snyder, Bruce Allen and the Redskins.
Still, it's my hometown and I'm going nowhere. Every fall, I'd wonder what it was like for teams winning playoff games and heading to a World Series.
Well, the Nats are heading to the World Series.
Good times are back. It feels like the Joe Gibbs era when winning three Super Bowls from 1983-91. Remember when everyone around town talked Redskins in a good way?
Really, pinch me. The four playoff ousters in recent years were so disappointing it seemed impossible for the Nats to really make a World Series. Maybe those seasons came too easily and the team wasn't ready for the real fight in the fall. This year, the Nats needed to fight all the way just to reach October, and that makes a big difference.
Not that anyone thought Washington could sweep St. Louis in the NLCS. Beat the Cards, yes, but not whip them so badly St. Louis fans will wince for years over this one.
Who knows if the Nats can win the World Series? I've seen the Bullets, Redskins, Caps, plus Maryland and Georgetown win championships, so why not the Nats, too? If they beat the Yankees, we could do a musical called, "Damn Nats – The Return of Joe Hardy." Goodness knows there's no shortage of people in town that could play the devil.
The Capitals won the Stanley Cup last year along with the Valor taking the ArenaBowl. The Mystics just took the WNBA crown. Now the Nats are in a World Series.
Titletown, baby.
Rick Snider has covered Washington sports since 1978. Follow him on Twitter: @Snide_Remarks.