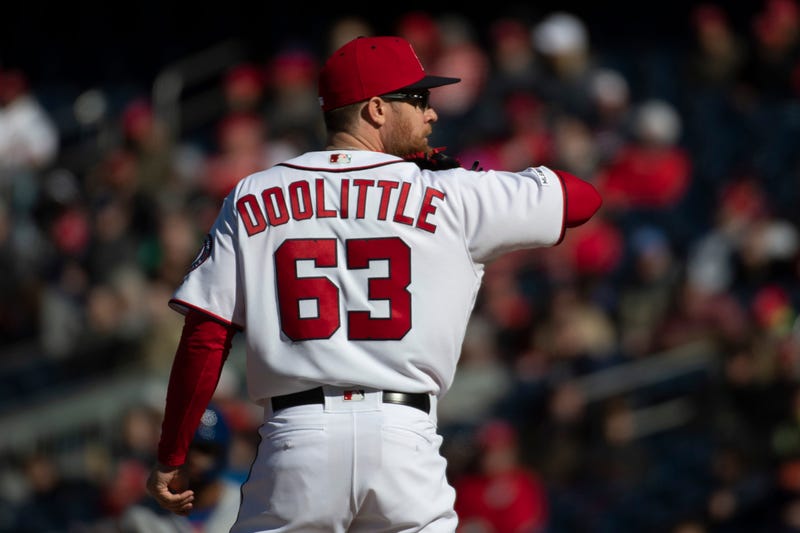 The Nationals' new-look bullpen has struggled out of the gate. Through three games, Washington relievers have a combined 12.27 ERA.

And according to Jesse Dougherty, these problems were apparent in spring training.

"I would say it's not only a three-game sample size, just because some of these issues were showing up in West Palm Beach," Dougherty told The Sports Junkies Monday. "Kyle Barraclough's command wasn't great in Florida, Trevor Rosenthal's command wasn't great in Florida and Sean Doolittle, once he got over 20 pitches down in Florida, started to wane too and lose his command."
"So a lot of these things that we're seeing now have been an issue over the last few weeks," he continued. "We saw this as a run-up into the year that the bullpen depth and the options after Doolittle, with Rosenthal, Barraclough, Wander Suero, Matt Grace, these guys weren't clicking in a way the Nationals would like them to."

"I think it is a question mark with this team. I thought it was on Thursday going into Opening Day, I think even more so now."

In particular, Dougherty pointed to Rosenthal as a key to the bullpen improving. In his first two regular season appearances since Tommy John surgery in August 2017, Rosenthal failed to record an out and surrendered five runs on four hits and a walk.

"Trevor Rosenthal's really your key there," said Dougherty. "If he doesn't clean this up and he's really lost his command and his stuff post-Tommy John — you're counting on him to be your key eighth inning guy and the key cog of this bullpen and bridge to closer Sean Doolittle.

"The Rosenthal stuff is the most troubling to me and what the Nationals — I don't want to say have to cross their fingers about — but have to really hope cleans itself up here."

With Rosenthal and other relievers struggling, Nats fans have begun to call for the team to go after free agent closer Craig Kimbrel. But Dougherty believes Washington will likely look for in-house solutions first.

"I think the first thing it does is maybe have the Nationals look internally at a few of their options," he told the Junkies. "Wander Suero and Kyle Barraclough had minor league options. I'm not saying those guys are being sent down, but you do have the opportunity if they're not pitching well to look in your organization and say, 'Is there any new look here we can give? Is there something we don't have?'"

"The first thing that comes to mind for me is a guy like Austen Williams, who retired 22 of 24 hitters he faced in the spring and has great swing-and-miss stuff ... Austen Williams throws mid-90s with this biting curveball that disappears in the dirt. He's a little wild, but he could provide you that swing-and-miss reliever that a lot of teams need to get through certain jams. I'm not sure this group has that."

"There's a lot of ways they can do this without hitting the panic button and shelling out for Craig Kimbrel. That said, is a a mid-season trade on the horizon for a Kelvin Herrera type? You could probably already project that that's gonna be something  that's being considered if this team thinks they're in contention and want to take the next step ... but I don't think it's right now."