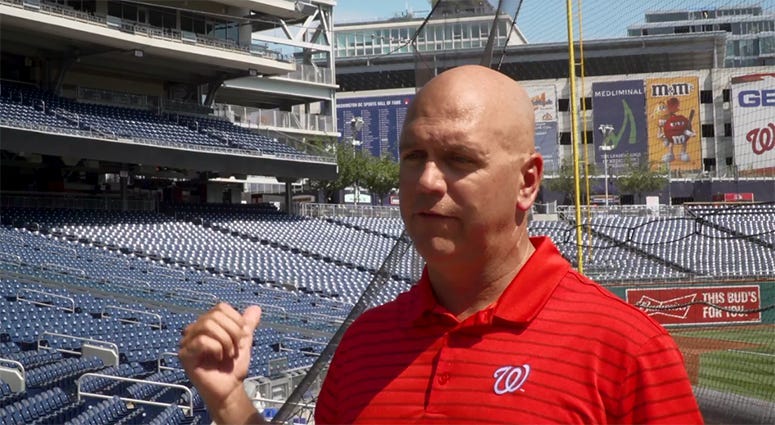 "So, for years, fans have sat behind home plate, where there's been netting existing for years," said Scott Fear, Washington's VP of Public Safety and Security. "We've added netting over the past years to extend past the dugout. Now we're just adding the netting from the dugout down to the corner to protect those fans from foul balls."

When fans show up to Nats Park tonight, they'll be a little bit safer -- (via @Nationals) pic.twitter.com/l29JyCdS4z

Major League Baseball mandated all 30 of its clubs to extend protective netting to the ends of their dugouts ahead of the 2018 season. The White Sox and Pirates, like the Nationals, are going one step further with their protective netting. Francisco Lindor, who hit a foul ball that struck a young fan at Progressive Field on Sunday, has called for the Indians to extend their netting as well.

Nationals owner Mark Lerner announced the changes coming to Nats Park in a letter to fans last month, explaining he was compelled to extend the protective netting after witnessing a spate of fan injuries around the league.

"Over the past few weeks, we have seen several fans injured by bats and balls leaving the field of play at other stadiums," Lerner wrote. "I could not help but become emotional last month watching the Astros-Cubs game when a four-year-old little girl was hit by a line drive. I can’t imagine what her parents must have felt in that moment.

"And to see the raw emotion and concern from Albert Almora Jr. was heartbreaking. Further extending the netting at Nationals Park will provide additional protection for our fans."

The club's decision to extend the netting seemed to be roundly welcomed by Nationals fans, at least according to this 106.7 The Fan poll:

Are you happy the #Nats are extending the protective netting at Nationals Park?DETAILS: https://t.co/mI5YH73cdP

The All-Star Break and Washington's ensuing nine-game road trip provided the perfect cover for the Nats to install the netting.

"Throughout Major League Baseball, there's been some tragic incidents this year, and in years past, that children and adults the same have been struck by line-drive foul balls or broken bats," said Scott Fear, Washington's VP of Public Safety and Security.

"So we at the Washington Nationals decided to extend the netting  – we're one of the first teams to do it, there's a couple of other teams in Major League Baseball that have also done it – to make sure our fans are safe. And that's what this is all about. We want to protect our fans, the children, the adults, everyone that comes to the game, and make sure they have a great time without worrying about being hurt."

"It's an ultra-light net. It's very thin. It's easy to see through," said Fear. "And we expect our fans to still come out with their mitts and catch foul balls, because there'll be pop flies, there'll be bloopers that come over the net, and fans will still be able to have that experience. This is something we feel is going to be very positive and our fans will feel safe being here watching the game."

For fans concerned about the netting limiting opportunities to catch foul balls, Fear encouraged them to arrive early before games for batting practice.

With Monday's game against the Rockies postponed until Wednesday – to be made up as part of a split doubleheader (Game 1 at 1:05 p.m., Game 2 at 7:05 p.m.) – Tuesday's game will mark the park's debut of its newly extended netting.