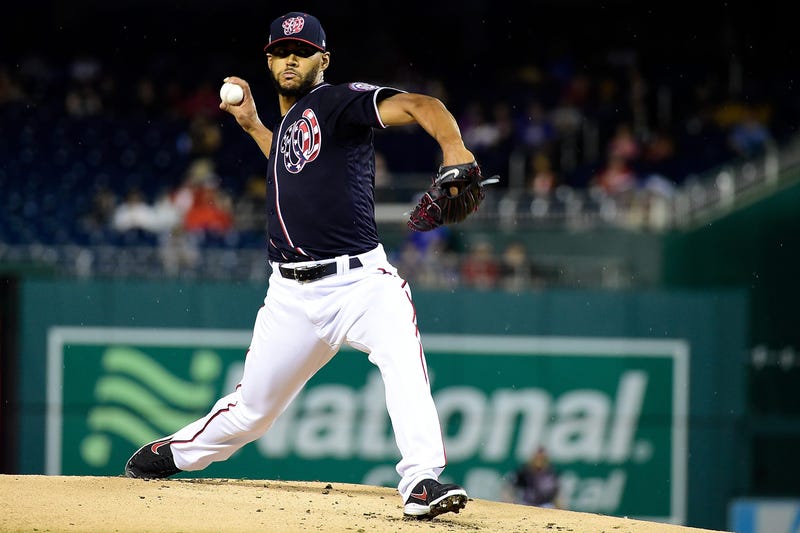 Friday night was supposed to mark Joe Ross's return to the Nationals rotation after over a year away recovering from Tommy John surgery. But Mother Nature had other ideas.

The Nats activated Ross on Sept. 4 after the right-hander made six rehab starts at various levels of Washington's minor league system. The team announced that same day he would start on Friday against the Cubs, his first MLB start since July 9, 2017.

Joe Ross will return to the rotation Friday as the Nationals take stock of their rotation depth. https://t.co/HRgxyfs1ot

Rain delayed the start of Friday's game for over an hour, forcing Ross to wait even longer to make his return to the mound. However, the storm eventually (and momentarily) subsided, and Ross began his start by pitching against a familiar face.

14 months removed from Tommy John surgery, Joe Ross is back. Fires a 96-mph fastball to Daniel Murphy for strike one.

Ross's fastball velocity, the dipping of which last season was the first sign something was wrong with his arm, looked better than ever before in the first inning, Ross repeatedly touching 96-97 miles per hour.

Joe Ross is back from Tommy John surgery and he is touching 97 in the first inning. I don't ever remember hitting 97 pre-surgery. #Nats

Joe Ross' fastball averaged 93 mph in 2016. He's been pumping them in between 95-97 mph here in the 1st inning tonight, post Tommy John surgery.

Ross worked around an Anthony Rizzo bloop single and an HBP of Kris Bryant to record a scoreless first frame, and came out for the second inning ready to keep it going. However, that's when the rain began to pick up again.

Looks like the rain is really picking up here. Not an easy night for Ross to make his debut part II.

Tarp coming back on. We’re in another rain delay.

The second delay lasted long into the night until MLB officially postponed the game, washing out Ross's work in the first and second innings. The game will be made up as part of a double-header Saturday, in which Ross will more than likely not participate.

Tonight's game has been postponed due to inclement weather.More information is available at https://t.co/XQCfYB8cuG. pic.twitter.com/D8Pvq2q4xz

Nonetheless, Ross showed positive signs that he's fully recovered from the torn UCL that sidelined him for so long, and should continue to get opportunities to pitch until the end of the season.