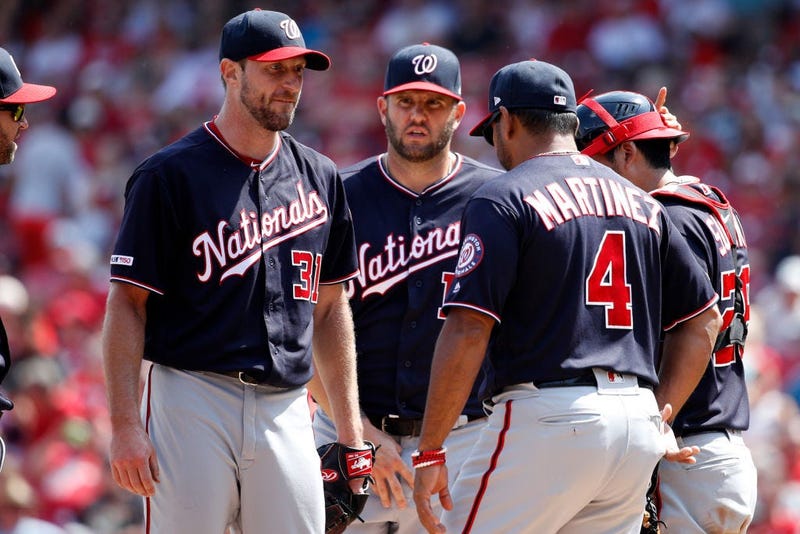 No one was taking the ball from Max Scherzer on Sunday afternoon, not even his manager.
The Nationals' ace earned his first win since May 11 with a dominant display against the Reds, striking out 15 and giving up just one run in eight stellar innings. But arguably the most stunning moment of the performance wasn't a pitch Scherzer threw, but the 'No!' he directed at Davey Martinez.
With two outs in the eighth inning and Cincinnati slugger Joey Votto coming to the plate, Martinez walked to the mound to consult with Scherzer and potentially pull him for a reliever. But Scherzer, who had already thrown 117 pitches, made it quite clear he was going to face Votto.

Scherzer, in full-on Terminator mode, struck out Votto on three pitches, stomping back to the dugout with a snarl on his face.

After the game, Scherzer explained his mindset when Martinez walked out to talk to him.

"I knew I was strong," he told reporters. "I knew with the schedule I had an off day the previous time, I'm coming up on another off day. My arm felt great, even in the eighth, and so I knew I had plenty left in the tank to keep pitching."

"I just wanted the ball in that situation. I know myself, and I know I want the ball."

"I got to hear it from him. He's got a lot of pitches, and I just want to hear that from him," Martinez said of the visit. "We exchanged some nonprofessional words, but it was good to hear that he wanted Votto."

"He really didn't have any stressful innings," Martinez added on Scherzer's overall performance. "He pretty much dominated today, which for me when you're that No. 1 guy, that's what you're gonna get."