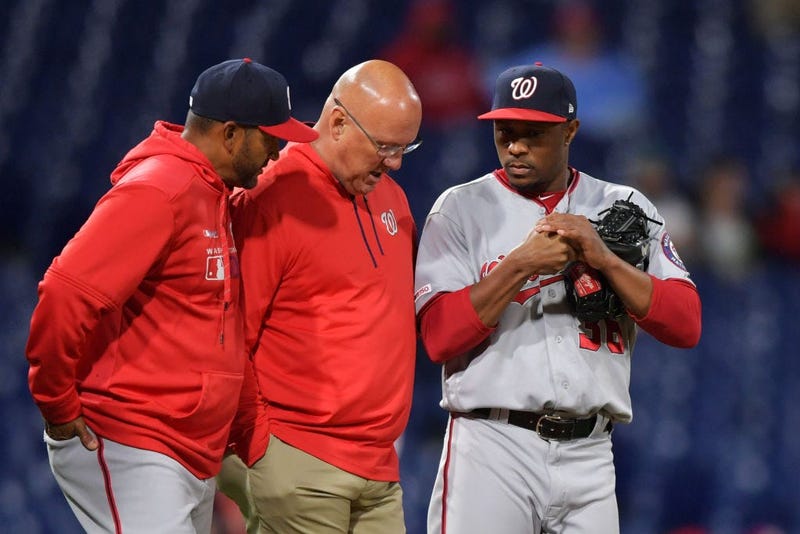 The Nationals dropped two of their three games against the Pirates over the weekend, Washington relievers suffering both losses: Matt Grace on Friday, and Wander Suero on Sunday.
It's clear the bullpen issues need to be addressed — the Nats still have MLB's worst bullpen ERA — but will general manager Mike Rizzo be able to do so under the budgetary restrictions the Lerners have given him? The Sports Junkies aren't so sure.
"Has (Rizzo) ever stood pat when there's been an obvious issue? Never. He's going to make moves," said Eric "EB" Bickel Monday. "The problem is, though, is that he does have budgetary constraints, and he's up against it."

"And all the guys they're talking about bringing in are off the scrap heap. They're guys they're gonna sign to a minor league contract to see if he's got anything left, guys that have been released."

The Nats were linked last week to veteran pitcher Bud Norris, but the deal fell through after the team reportedly expressed concerns Norris wouldn't be ready for at least another month.
Fans have been clamoring for the Nats to go after free agent closer Craig Kimbrel, but EB says there's a "reason" why they haven't pursued the seven-time All-Star: the luxury tax threshold.

"I trust (Rizzo) to make moves at the right time. Now, I don't know if he'll necessarily be able to get the right one because he has budgetary constraints. I'm telling you, that's what's killing this team in terms of the bullpen," exclaimed EB.

"They have budgetary constrains. If they didn't, they'd go out and sign Kimbrel or some of these other guys. 100 percent."

"(Rizzo)'s limited. The Lerners have told him they don't want to go over whatever the threshold is. They're right up against it, they're limited!"

Managing principal owner Mark Lerner has even made it clear publicly he doesn't want the Nats going over the $206 million threshold (Washington's payroll currently sits at just under $197 million, per Spotrac): “It’s a pretty severe penalty if you go over and it’s been our goal all year to stay under that,” he told NBC Sports Washington in February.
Thus, unless it's via trade, the Nats are unlikely to add a big-name reliever like Kimbrel anytime soon. But if it's any consolation, many teams are having bullpen issues, as John-Paul Flaim pointed out.

"We've seen early in the season, bullpens from the other teams are all a mess, too!" Flaim said. "It's the Achilles heel for most teams. Most teams have a really good closer — somebody that gets 40 saves, 45 saves, 50 saves, whatever it is — but those sixth, seventh, eighth inning guys, they all seem to be struggling."