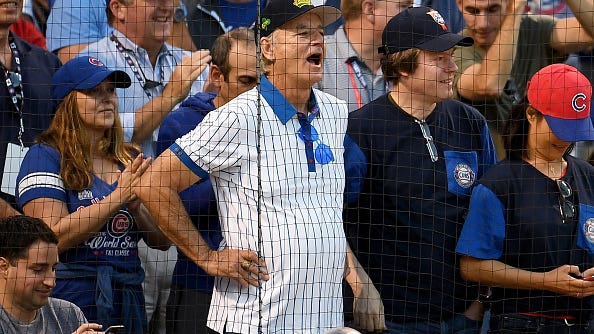 The Houston Astros have apologized for a sign-stealing scandal that cost their 2017 World Series-winning manager and general manager their jobs on Thursday with owner Jim Crane saying it will never happen again.

Well, they only sort of apologized.

"This will never happen again on my watch," Crane said, before he lobbied the players did not deserve to be punished. "Our players should not be punished for these actions. These are a great group of guys who did not receive proper guidance from their leaders."

One of those players, Alex Bregman gave a very brief apology during the half-hour press conference.

"I am really sorry about the choices that were made by my team, by the organization and by me. I’ve learned from this and I hope to regain the trust of baseball fans," he said. "I would also like to thank the Astros fans for all of their support. We as a team are totally focused on moving forward to the 2020 season.”

Crane added he did not believe the Astros cheating had any impact on the outcome of games. “Our opinion is this didn’t impact the game. We had a good team. We won the World Series and we’ll leave it at that,” he said.

The 2019 World Series champion Washington Nationals, who share a spring training complex with the Astros, did not seem satisfied.
“They crossed the moral line and cheated, but they got to answer for it," Max Scherzer told reporters Thursday. "It’s not really for us to speak for them, they need to speak for themselves, to talk to the fans of baseball and explain what happened."

Max Scherzer on if other teams winning the World Series potentially by cheating makes him upset."It does, but they have to answer for that....They need to speak, how they answer it, what their actions say I think speaks more than what I have to say."

"One day of having to answer questions is not going to make this go away," he said. "This is going to be something that they're going to have to work really hard at to show baseball, to show other players, to show fans that they are remorseful and they do want to move on from this.

"I think in the long run some of their actions will speak louder than words, and being sorry that you got caught and being sorry for what you did are two different things. It's not going to go away in one day. This is going to be an ongoing process, unfortunately. This is something that all of baseball has to reckon with, and we're all still trying to come to grips with it and process it. So it might take a bit."

Sean Doolittle, as he so often does well, really puts the Astros scandal (and their response to it today) into proper perspective ... pic.twitter.com/4tMwKYvLZx

Will have more on Harris’a comments a bit later. But he did say this, regarding the Astros apologies and his small press conference: “I’m glad today happened.”

And it's important to remember the scope of this scandal extends beyond the Astros organization.

Baseball analyst Ryan Spaeder told 106.7 The Fan in January that as many as eight other MLB teams "have done just as much as the Astros." Spaeder now says MLB chose not to go after players, not because of CBA concerns, but because it would "lead to more whistleblowing, the involvement of several other players and teams, and, in turn, a league-wide implosion."
But when it comes to the Astros, the prospects of a long apology tour do not seem likely.

Reddick cont.: "It's just something we got to ask for forgiveness again and keep saying how bad we feel, because this team feels very sorry, very bad for what has happened and that we didn't take more of a role in preventing it."

When pressed by a reporter if he would use the word cheating, Crane refused to call what his team did cheating.

"We broke the rules," he demurred. "And you can phrase that any way you want."

And with that avoidance, the 2020 MLB season has begun.