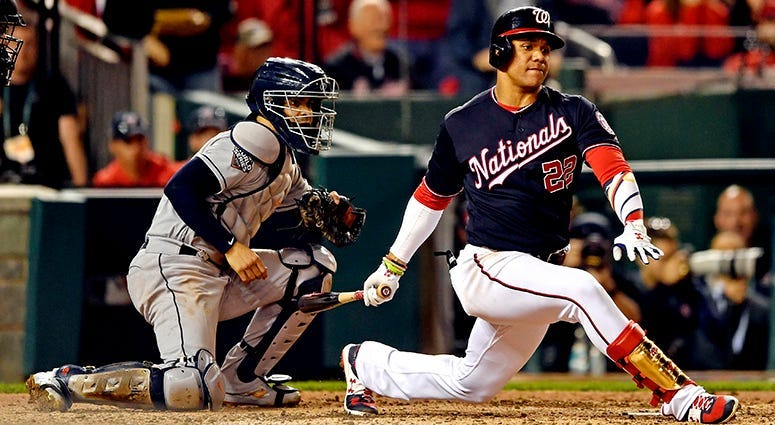 The Washington Nationals' postseason winning streak was unlikely to reach 10, but they never gave themselves a chance in Game 3 of the World Series.

After an electric 2-0 start to the series and triumphant return home, the Nats had a power outage at the plate and couldn't hit with runners in scoring position, or even generate situational contact.

And those two-out rallies that fueled this October run? Forget about it.

The Nats finished the night 0-for-10 with runners in scoring position. That's only slightly better than the 2008 Phillies, who went 0-for-13 in one World Series game, the worst mark in history.

From a power perspective, the Nats went from averaging more than three home runs per game in Houston to zero at home. No problem: the Nats have the advantage of a deep bench to play matchups and small ball.

But not even that worked on Friday night.

In the bottom of the fourth inning, the Nats got their best chance to rally after Victor Robles hit a triple that knocked in Ryan Zimmerman. Skipper Dave Martinez elected to stick with starter Anibal Sanchez on the mound, so the pitcher took his scheduled at-bat with a chance to score Robles.

Rather than laying down a squeeze play, Sanchez struck out with a foul ball bunt attempt, muttering as he stalked back to the dugout. Trea Turner, batting with two outs, gently grounded out to Astros ace Zack Greinke on the next pitch.

In the sixth inning, Martinez tapped Gerardo Parra to pinch-hit for catcher Kurt Suzuki. After a prolonged "Baby Shark" intro, fans went flat as Parra struck out swinging. On his way back to the dugout, Parra uttered words that can't be found in a verse of "Baby Shark."

Juan Soto, who has played hero for the Nats on multiple occasions this postseason and was also celebrating his 21st birthday, had a night to forget.

Besides misplaying multiple balls in the outfield, Soto also went 0-for-4 at the plate, striking out three times including a strikeout looking to end the game. He also joined Turner, Anthony Rendon and Asdrubal Cabrera in stranding at least three runners on base.

As a team, the Nats left 25 runners on base. The Astros had the same number of base runners in the game but scored four runs.

The loss lets the Astros back into the series (2-1) and could have lasting effects on momentum and morale. The Nats have dealt with adversity all season, but have generally found a solution whenever the going got tough.

There will be soul searching after this loss, and it would not be surprising to hear about Nats hitters who stay late or arrive early tomorrow to get extra work in.

Blame it on a travel day messing with momentum and chemistry. Blame it on the Nats listening to rosy stats about teams that win the first two games of the World Series. Blame it on the jitters of playing the biggest home game in franchise history.

Any of those excuses work, as long as the team can fix the problems before Game 4. Otherwise, this team could be 24 hours from a 2-2 series tie and a guaranteed trip back to Houston.