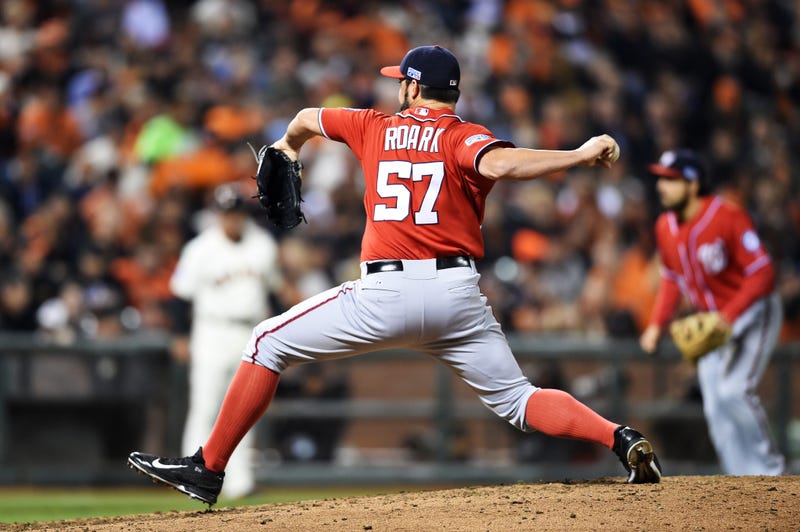 December 13, 2018 12/13/2018 2:29 am
The Nationals traded Tanner Roark to the Cincinnati Reds in exchange for right-handed pitcher Tanner Rainey on Wednesday.

Roark, 32, first arrived in Washington in July 2010, as a piece in the trade that sent All-Star shortstop Cristian Guzman to the Rangers.

Roark progressed through the minors fairly quickly, making his Major League debut for the Nats in Aug. 2013, when he pitched two scoreless innings in relief.

Arriving as an unknown quantity to fans, Roark proved himself to be a stalwart out of the pen, allowing just four runs and a .182 batting average against in his first nine relief appearances, pitching his way into a starting role at the end of a lost Nationals 2013 season. Roark broke from camp the next spring as a starter.

Roark did everything the Nationals asked of him in his six big-league seasons here, including going back in the pen after establishing himself as a middle-of-the-rotation starter, because the Nats simply had too many hands on deck in 2015. He had just one year of arbitration left before hitting free agency after the 2019 season.

Tanner Roark is projected to make around $10M next year, per @mlbtraderumors in arbitration. He is eligible for free agency after the 2019 season. #reds

Tanner Roark and the Nationals went through a lot over the years. Always seemed to be the starter that got the short end of the stick, or the guy who had to come out of the bullpen on no rest, or whatever. Stuck it out.

I'll miss Roark. That dude was just a gamer. Even if he wasnt as good these last 2 yrs. He has balls. Love that guy. Appreciate all he did. I'm sure Rizzo has more up his sleeve too.

Rainey, 25, went 7-2 with three saves and a 2.65 ERA in 44 relief appearance -- and 51 innings -- for Cincinnati's Class-AAA affiliate Louisville in 2018. He recorded 65 strikeouts and allowed 35 walks and a .148 batting average against. He was named an International League All-Star.

Rainey made his Major League debut in April and would make eight relief appearances across four stints with the Reds in 2018, pitching to a 24.43 ERA.

Rainey, a University of West Alabama product, was a second-round selection (71st overall) by the Reds in the 2015 First-Year Player Draft. He was Cincinnati's 23rd ranked prospect, according to MLB Pipeline.

Tanner Rainey, acquired by the Nationals for Tanner Roark, averaged 97.7 mph with his fastball in limited MLB time last year.He was one of 36 pitchers to hit 100 mph at least once.

Nationals President of Baseball Operations and General Manager Mike Rizzo made the announcement.