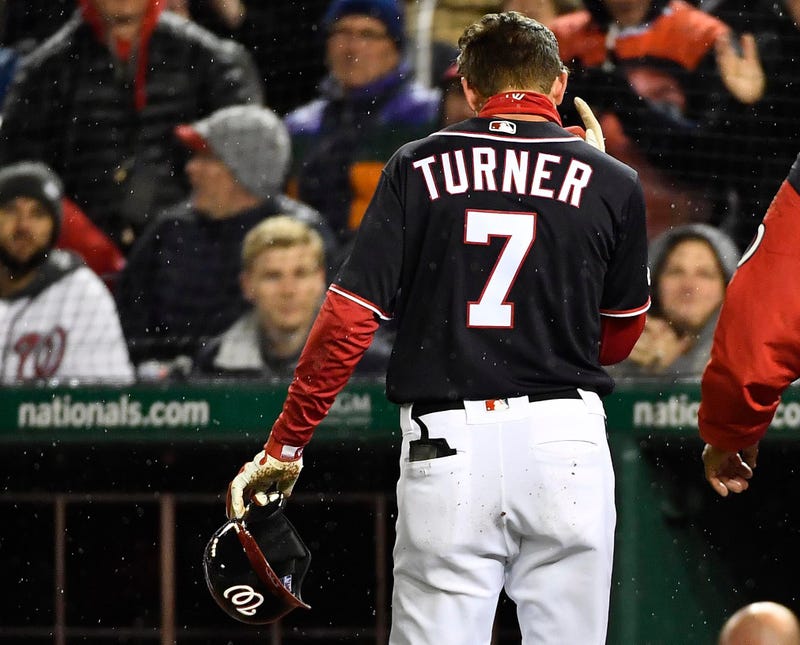 Nationals shortstop Trea Turner was placed on the 10-day injured list Wednesday after breaking his right index finger in Tuesday's loss to the Phillies.

Adrian Sanchez was called up from Triple-A Fresno to take Turner's place on the roster, and had quite the journey getting to Nationals Park for Wednesday's afternoon game versus Philadelphia.

Adrian Sanchez’s recent itinerary...SAT: Left FloridaSUN: Arrived in FresnoTUE, 6 pm: Told he was getting called up11:15 pm: Fresno to ChicagoWED, 7 am: Chicago to DC10:30 am: Arrived at Nats Park(Asked if he knows what day it is, he answered: “Tuesday?”)

Turner was off to perhaps the hottest start in the Nats lineup, batting .357 with two home runs, four RBI, four runs scored and four stolen bases in the first four games of the season.

Sanchez has played in 62 games over the past two seasons with the Nats, the versatile infielder batting .271 and driving in 14 runs in his MLB career thus far.

Additionally, veteran infielder Howie Kendrick is nearing a return from his hamstring injury, and could be activated as soon as Thursday.

Rizzo said they’ll wait to see how today plays out, but he doesn’t believe Kendrick needs a rehab assignment. Sure looks like he’ll be active tomorrow in NY.