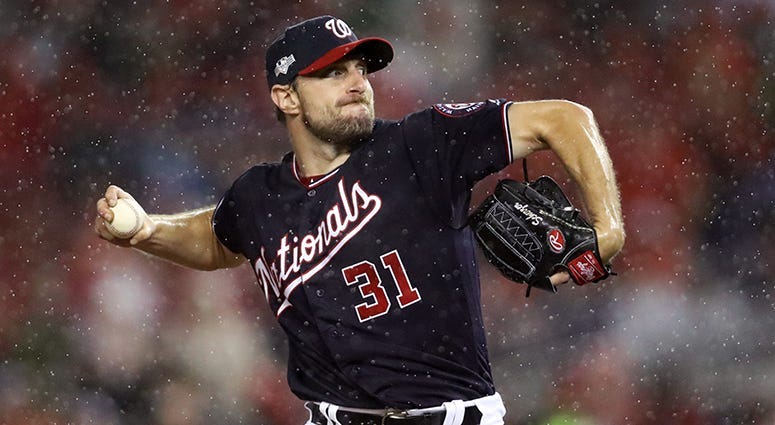 On Sunday, Washington Nationals ace Max Scherzer will take the ball in what could be the biggest game of his career.

Instead of pitching for a championship, Scherzer will instead be tasked with stopping the bleeding against a team that has outscored the Nats 12-2 in D.C.

His team is in freefall after blowing a 2-0 series lead, looking flat in all facets of the game. The offense is an anemic 1-for-19 with runners in scoring position. The bullpen still can't be trusted and the defense is suddenly suspect.

But it's the starting pitching that has put them on the ropes, with Anibal Sanchez and Patrick Corbin combining to allow eight runs on 17 hits across 11.1 innings.

With the series now tied at two games apiece, "Scherzday" couldn't come soon enough, and it needs to be a beauty.

Scherzer has won each of his last three postseason starts but has not looked his snarling best. In Game 1, he allowed two runs on five hits and lasted only five innings while striking out seven.

Let's chalk that mediocre performance up to the long layoff and see what Mad Max can deliver in the clutch. Of course, it won't be easy.

The Astros are one of the most disciplined offenses in baseball, leading MLB in walks during the regular season. Scherzer thrives by throwing pitches that start out as strikes and dart out of the zone, missing bats.

That won't work against the Astros, forcing Scherzer to nibble at the corners more than he might like. That puts him at the mercy of the umpires – and he can ask Sanchez how reliable they are.

The Nats need Scherzer to go deep in the game, going pitch for pitch with AL Cy Young favorite Gerrit Cole. The Nats were unusually effective vs. Cole in Game 1, but have been short on luck since.

On Saturday night, they put four balls in play that were at least 100 mph coming off of the bat. All four ended in loud outs. Power is nothing without luck.

The Nats need to remember how to hit with two outs, something that defined their eight-game postseason winning streak. Since returning to D.C., Astros pitchers have stranded 21 Nats runners on base, including 12 in scoring position.

A revived Nats offense would give Scherzer license to be more aggressive on the mound and deliver an iconic performance. Either way, he will be the author of the final chapter of baseball played in D.C. this season.

A win puts the Nats in the driver's seat with a chance for Stephen Strasburg to close out the series on the road. A third-straight loss puts the Nats on a very quiet charter flight to face their fate in Houston.

Help us Max, you're our only hope.