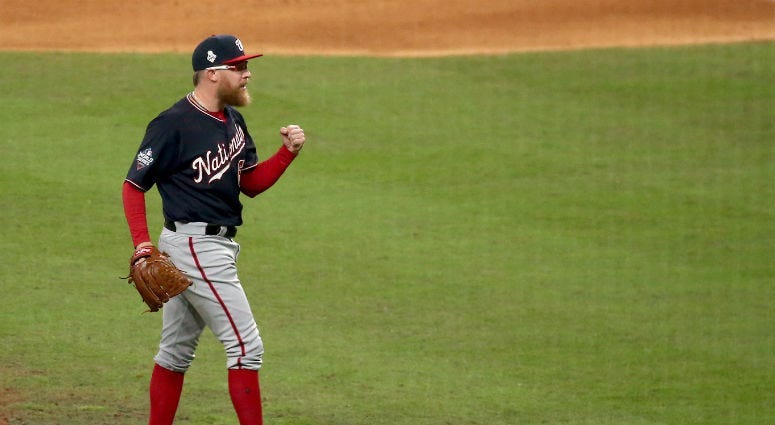 We've already gone over how the Capitals haven't forgotten the support they received from the Nationals during their 2018 Stanley Cup championship run.

Now that it's the Nationals' turn, the Caps are doing everything they can to return the favor, and enjoy doing so. But perhaps there's some sort of karmic reciprocity to it all, the idea of a community coming together to support its own on the grandest stage.

On Tuesday night, the Capitals completed their 5-3 victory over the Flames around 11:31 p.m. ET (9:31 p.m. Calgary time), affording them the opportunity to catch the final 22 minutes of Game 1, just in time to watch Sean Doolittle retire the side in a one-two-three bottom of the ninth for the save and a 5-4 Nats win.

Caps winger Carl Hagelin – during his weekly 106.7 The Fan appearance with Grant & Danny, presented by F.H. Furr – says they received an update on the Game 1 score right away.

"We had a TV in the locker room when we got off the ice and we were able to watch the last inning," Hagelin told 106.7 The Fan's Grant Paulsen and Danny Rouhier. "It was pretty neat to see them get that first win. We were pumped up about our win and then we got even more pumped up when we saw the Nats get their win."

"For that last pitch," Hagelin said, "we were all standing there together watching and cheering, and rooting on for the Nats."

The Capitals have won four straight, including the first two of a five-game road trip that runs through Chicago, Calgary, Edmonton, Vancouver and then Toronto.

A lengthy west coast road trip, along with the added joy of being able to communally watch the Nats succeed, is the type of bonding experience that brings teams together, the two-time Stanley Cup champion Hagelin says.

"I think it's great. I think early on, I've been fortunate to have this type of road trip early on a lot of times during my career, going out west in Canada," he said. "I think it's great just for the camaraderie, hang out with the boys, and especially now with the Nats going on a run here. It brings our team together."

"Early on in the year it's important to get together with all the guys and become a team," he said. "With so many new faces, you definitely need it. Everyone needs to feel included and feel comfortable. Guys making fun of each other, that's a big part of becoming a good team, becoming a team where you want to do everything you can for the guy next to ya.

"Like you said, it's a great thing to do early on in the year to get one of these road trips in."