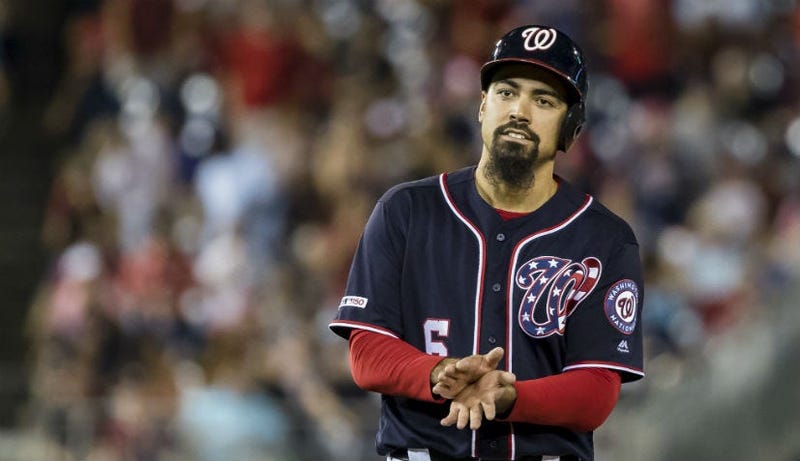 All the Nationals Twitter account wanted to talk about was how good Anthony Rendon was among National League third basemen. That's all they wanted to do.

This is a phenomenal level of production. And just as a comparison's sake: Bryce Harper has a WAR of 3.2 and OPS+ of 121 for the 2019 season and he makes a fair chunk of change more than his old teammate.
Why bring up Harper? Well, because that's the elephant in the room and Nationals fans know it: Will Rendon go the route of Harper?
"We're aggressively trying to sign Anthony Rendon," Nats GM Mike Rizzo told The Sports Junkies in May. "We're certainly going to be aggressive and try and make that happen, and hopefully he'll go. We have shown that we are not afraid to sign our own players. We're not afraid to sign free agent players. We're not afraid to spend money on stars of the game and I don't think Anthony Rendon would be any different."
Unfortunately, those words don't work for fans in the wake of Harper leaving and now that the 29-year-old All-Star is increasingly likely to test the waters of free agency at the end of his contract this season.
And when told the great numbers of Rendon, the fans wanted the at least somebody to hear them. And the replies on Twitter tell a full story of how Rendon's amazing season may be remembered.

Sounds like someone you should give a contract extension to #ExtendRendon

And yet he's not signed. pic.twitter.com/q7rNrxE3IR

Do I even have to say it?

And that wasn't the last time fans got a few tweets off Wednesday night.