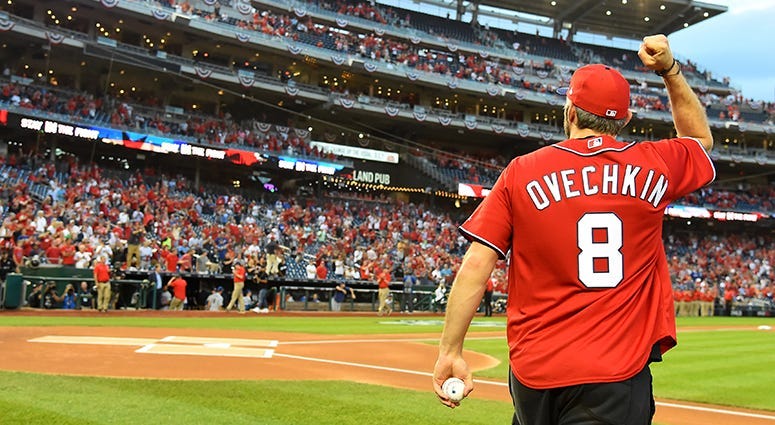 Photo credit Will Newton/Getty Images
By Chris Lingebach 106.7 The Fan

October 25, 2019 10/25/2019 8:14 pm
The Washington Nationals continue to receive support from the road from their hockey brethren, the Washington Capitals.

Unfortunately for the Caps, although they have three days between games Friday night in Vancouver and next Tuesday in Toronto, they'll be flying straight to Toronto after Friday's game, so they won't be able to take in any World Series games in person at Nats Park. Which would rule out Alex Ovechkin throwing out another first pitch. The Nats, for what it's worth, are 8-0 since Ovi's first pitch before Game 4 of the NLDS.

Caps center Lars Eller is among those who have been keeping up with the Nats on their five-game road trip. Eller admittedly doesn't know much about the sport, which is virtually non-existent in his home country of Denmark, but he enjoys watching the postseason regardless.
With that knowledge, The Sports Junkies decided to playfully pepper Eller with baseball questions during his weekly 106.7 The Fan appearance Friday – driven by AAA.

The first question: "Do you know what a sacrifice fly is?"

"I do not," Eller admitted.

"It's okay," said John Auville with a chuckle. "You know what? It's fine. You don't need to know that information."

"He knows what a slap shot is," John-Paul Flaim added.

"You know, even if you don't  know like the rules and understand the details of the game, you could just tell through the TV that they were having fun," Eller said of the Nats. "They have some swagger to their game right now, confidence. You can just tell. If you're gonna have success in any sport, you gotta have some of those things."

"Do you think there's gonna be another parade in Washington, D.C.?" asked Jason Bishop.

"The way things are looking right now, that would be a good bet," said Eller. "They've still got two games to go, but it's looking very good right now. They're looking great."

"He knows what best-of-seven wars are like," said Flaim. "It's just two games."

"Are there watch parties going on in bars in Denmark for the World Series?" Auville asked. "I'm guessing there probably aren't."

"There aren't, not," said Eller. "Baseball isn't played really back home. Yeah, nobody plays baseball unfortunately. It's probably the one American sport that hasn't really... that's cared about the least in Europe, I would say."

Eller's segment begins at the 28:30 mark below.