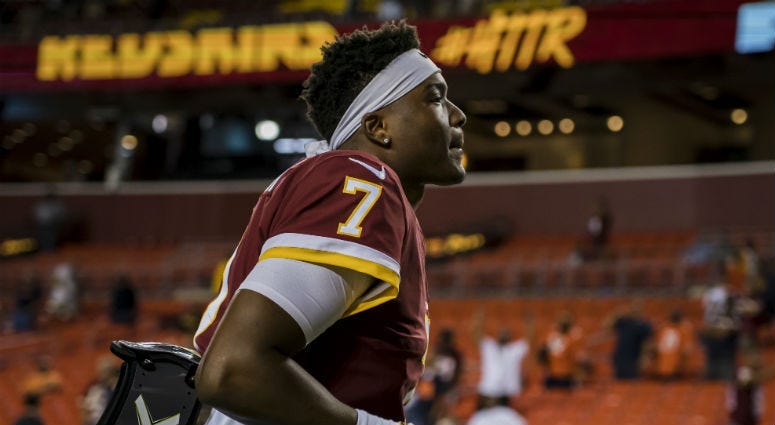 The Dwayne Haskins watch has begun.

Oh, maybe not right away, but Case Keenum threw his job in the dumpster fire that was another bad loss on Monday Night Football, where Chicago fans outnumbered local fans and the Bears defense out-muscled the Redskins offense when it mattered.

Keenum was good in the season's first loss, mediocre in the second and poor in the third, with two interceptions and a fumble leading to a 28-0 Bears lead. The crowd started chanting for Haskins, but it's not quite time yet for the rookie.

Washington faces the New York Giants on Sunday. It's their best chance to avoid an 0-5 start with New England looming on Oct. 6. It's better to play Keenum and, no matter what, not start Haskins against New England.

No, the Redskins want to grow the first-rounder into a franchise player and not debut him against the Patriots in what will likely be an ugly mess. Instead, Washington needs to hold on to Haskins until facing Miami on Oct. 13. Spend the next two weeks readying him in practice so the passer and team have a chance to win.

Why look to bench Keenum eventually after one bad game, given the second half was better? Because this season is going nowhere and the Redskins need to know if Haskins can play. If he looks awful the rest of the season, then that probable top-five pick next spring might go for a quarterback.

If Haskins fares at least OK, then that pick goes for a left tackle, since Trent Williams remains AWOL. And frankly, Williams returning at this point won't save the season, so trade him now or in the offseason. Get a second-rounder to couple with the first-rounder and trade up in the draft if needed.

The future was never supposed to be about Keenum. The Redskins needed a stopgap quarterback and Keenum played his part for a few games. He bought time needed to break in Haskins, who's hopefully better ready than he was in the preseason.

Now is the time to plan the future. A new coaching staff is coming. Somebody that can improve Haskins. Sounds simple, but coaches Steve Spurrier, Joe Gibbs, and Mike Shanahan tossed aside their incumbents while Jay Gruden didn't wait long to bench Robert Griffin III.

The Redskins never understand they're in a tear-down mode. The front office always thinks they're just a player or two away. Well, maybe if those two players were a young Sonny Jurgensen and John Riggins, while also adding Darrell Green, the Hogs, Dexter Manley, Art Monk and the rest of the great '80s Redskins.

This season comes in two parts – collapse and rebuild. The latter starts Oct. 13 in Miami.