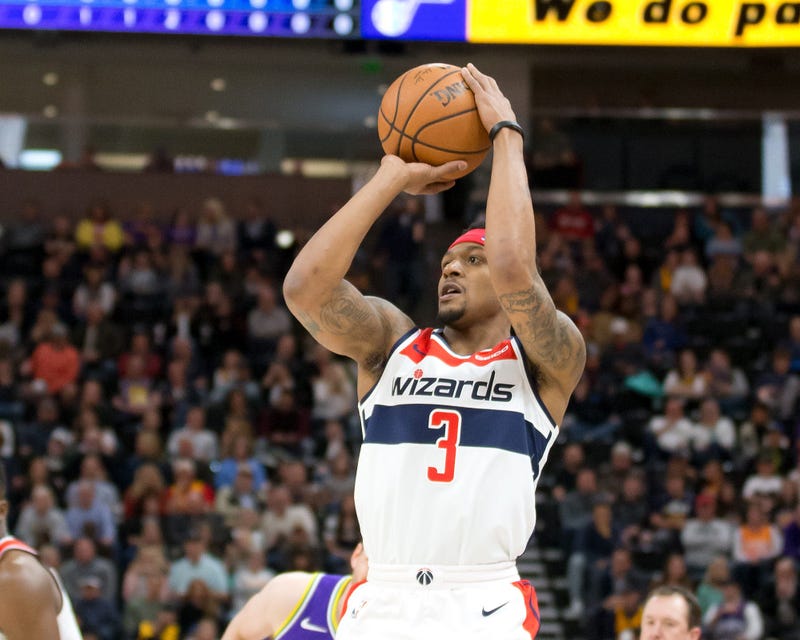 The New Orleans Pelicans now have a war chest of young players and draft assets after trading Anthony Davis to the Lakers for Lonzo Ball, Brandon Ingram, Josh Hart, and three first-round picks, including the No. 4 pick in Thursday's NBA Draft.

And according to multiple reports, they've set their sights on acquiring Wizards All-Star guard Bradley Beal.
"(Pelicans vice president David) Griffin has been open to moving the No. 4 overall pick, and one player league executives believe the Pelicans are monitoring in a potential trade is Washington Wizards All-Star Bradley Beal, sources said," The Athletic's Shams Charania wrote Monday. "But Wizards interim president Tommy Sheppard is running the Washington front office as of now, and the franchise has been adamant for months that it hopes to build around Beal."
Beal is coming off a stellar individual season, setting career-highs in points (25.6), rebounds (5.0), and assists (5.5) per game and making his second straight All-Star team. Beal is about to turn 26 and on a relatively affordable contract after missing out on All-NBA and thus supermax contract eligibility, making him attractive to teams looking to contend.

NBC Sports Washington's Ben Standig also reported the Pelicans explored the idea of acquiring Beal. But like Charania, Standig says the Wizards are reluctant to deal their star guard.

"Whatever the initial parameters, the conversation never veered close to actual negotiations, according to a source," he continued. "This one rejection does not mean Washington has completely shut the door on future talks with teams. However, the sense from league sources is the team plans on keeping Beal despite ample interest from contenders."

The hesitancy to part with Beal is understandable: he's the Wizards' best player, particularly with John Wall sidelined for most, if not all, of the 2019-20 season with his Achilles injury. But at this point, Beal may not have more value on the trade market than he does now.
"Beal is the only real chip that you have," John "Cakes" Auville of The Sports Junkies said on Tuesday. "He's the only desirable piece that other teams want, and would give up other assets for."

"So as much as it would pain me as a Wizards fan to deal Beal, I think that's the move that Tommy Sheppard and everybody else in that room is gonna have to consider, especially before the draft on Thursday."