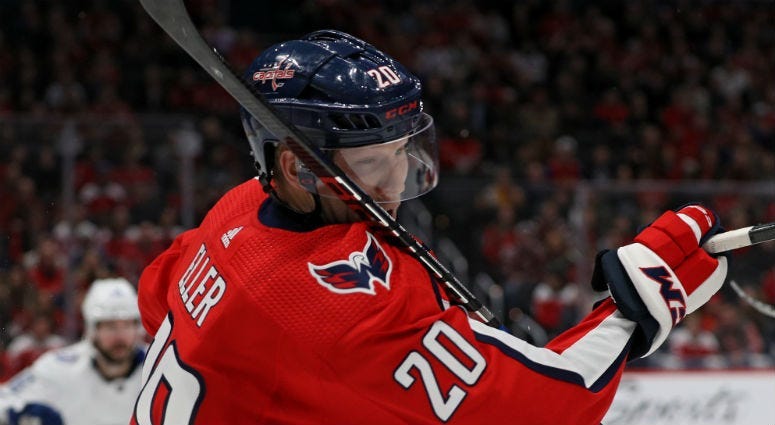 December 20, 2019 12/20/2019 12:00 pm
One father notably missing from this year's Capitals' dads trip in Tampa: Olaf Eller.
The father of Caps center Lars Eller, Olaf, at 59 years old, is still hard at work coaching Denmark's men's national junior ice hockey team. Him not making the trip stateside was a topic of conversation during Lars Eller's weekly appearance with The Sports Junkies, driven by AAA.

"He couldn't make it this year because he was coaching at the World Junior Championships the same week that we had our dads' trip," Eller said on 106.7 The Fan. "But he's been in the previous two and hopefully he'll be able to make it next year. I know he was missed on the trip."

Playing hockey was somewhat of a birthright for Lars, the son of a hockey coach and former player, and brother to three hockey players themselves.

"It was great for me, really our whole family," Eller said of having a coach as a father. "I mean, I have three brothers. They all played hockey and my dad was coaching. You could imagine what conversations at the dinner table was like and me practically growing up at the rink."

"You know, as soon as school was over, you head to the rink, spend like three, four hours there, watching all my dad's teams play games," Eller continued. "Hockey was just a huge, huge part of our life. He used to play it. As soon as he stopped playing, he started coaching, literally from one day to the next.

"So hockey has been his whole life and he lives and breathes for that. With the jobs he has, he still catches most of our games. And if not, he'll watch it the next day."

"Was he super hard on you?" Eric Bickel asked. "Or was he one of those guys where, hey, if Lars loves it, he'll do it. I'll just be supportive."

"I think it was more the second," Eller said. "He was also very busy with his own teams. He had enough on his plate. I was just kind of tagging along with him to the rink most of the time, and just very supportive. I mean, he didn't need to pressure me.

"I loved the game. I love skating, I love the speed, I love everything about it. Fell in love with the game very early, so there was no need for him to like really push me in that sort of direction, but obviously always been there for me with good advice throughout my career."