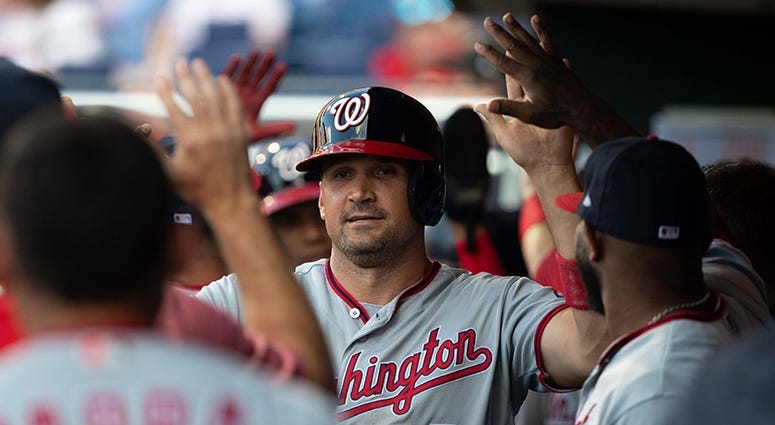 The Washington Nationals looked every bit the part of a playoff team this weekend, closing out a 6-1 road trip with a three-game sweep of the NL Central-leading Cubs.

Now back in the friendly confines of Nats Park for a squash match with the Baltimore Orioles, the only question is how much hotter can they get?

With a 12-2 record in their last 14 games, the Nats have only picked up a game on the Atlanta Braves, who are 11-3 over the same stretch. At this point, every game is precious in the battle for the NL East crown.

The good news is that the hot streak has propelled the Nats comfortably ahead of the Phillies and Mets, who are five and six games back of the Nats, respectively.

After the first day off in 10 games, the Nats have to regroup and not look past the 43-88 Orioles. Here’s how the Nationals can help their Race for Red October against Baltimore:

Playoff chances (via fivethirtyeight.com): 97 percent
Playoff clinching magic number: 30
National to watch: This series could bring the long-awaited return of Ryan Zimmerman, although the team’s recent hot streak allows the front office room to be cautious in rushing him back. Matt Adams has been a league-average hitter in his absence, although a platoon could push them back into more comfortable roles.
Oriole worth pondering: Rebuilding projects, like the one in Baltimore, create opportunities for players to shine. No player has taken better advantage of that than outfielder/first baseman Trey Mancini, who has slugged 29 home runs, collecting 74 RBIs and 50 walks. The Orioles have lost a ton of games this season, but they still have some hitters that can do damage.
By the numbers: It’s a tale of two seasons for the Nats, going 19-31 over the first 50 games and 54-26 since. That .675 winning percentage would deliver 109 wins over the course of a season, but it is good enough to get the Nats to about 95 wins if they can keep it up through a tough September schedule. Still staring up at the Braves in the standings, the Nats may need more of the .857 winning percentage that they’ve had in the last two weeks.
Notable quote: “They’re hot—probably as hot as any team we’ll ever play right now.” That was Cole Hamels’ response to running into the Nats’ buzz saw this weekend. The Cubs had everything to play for, going into the weekend with a thin lead in the NL Central. After a weekend drubbing, they’re three games back of the Cardinals.
Series prediction: This year’s so-called “Battle of the Beltways” is one of the least compelling in years. The Orioles are in unapologetic rebuilding mode and are battling with the Detroit Tigers for the first pick in next year’s amateur draft. Sandwiched between two off days, this two-game series should be a walk in the park for the Nats, which are the hottest team in baseball. The Nats need to sweep the series and keep their playoff-level edge.
Brian Tinsman has covered D.C. sports since 2011, both from the team marketing and skeptical fan perspectives. Tweet your criticisms @Brian_Tinsman.